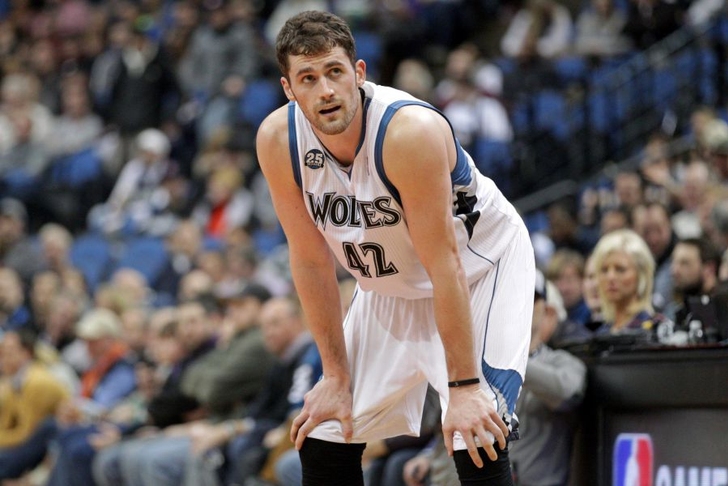 With the clock winding down before the NBA trade deadline, the rumors surrounding the Los Angeles Lakers have started to swirl. While a number of trades have been proposed and several players have been linked with moves elsewhere, it's hard to separate the facts from the speculation - we've rounded up the hottest Lakers rumors from the past 24 hours and analyzed which ones (if any) carry real weight.

The Latest on Kevin Love

While Love being linked with the Lakers is nothing new, his latest statement on the matter turned heads for all the wrong reasons (well, as far as the Lakers are concerned).

“People think it's so far-fetched that I would stay in Minnesota,” Love told GQ.com. “And I'm not shitting on the Lakers, but we have the better team, the better foundation. I'm having fun.”

Love's comments don't rule anything out, but they certainly cast doubt on any rumblings that a move is imminent. While we still think the odds of Love joining LA in the Summer of 2015 are high, don't expect him to leave Minnesota any time soon - and especially not before Thursday's deadline.

Pau Gasol has been the subject of approximately 4,732 different rumors over the last two weeks, so we'll forgive you if you're taking a 'I'll believe it when I see it' approach to any speculation on the Spanish big man.

"A number" of rival executives reportedly said that they think Gasol will end up on the Phoenix Suns before the deadline rolls around (according to @AlexKennedyNBA), but there have been no other reports that Phoenix and the Lakers are even discussing the move.

The interest Phoenix has in Gasol is reportedly legit, but that does nothing to guarantee a move - LA wants a real asset for Gasol, and it doesn't sound like the Suns are willing to part with anyone the Lakers are interested in. Things could change if they come back with an improved offer, but as things stand, we'd be shocked if Gasol gets moved before the deadline.

NBA Execs have expressed that Carmelo Anthony could be headed for the Lakers this Summer, and no one would be shocked - Melo's wife spends a lot of time in LA, and he's publicly stated that he might have to leave New York to pursue a ring.

There's been chatter that the Knicks might try to trade Anthony to avoid losing him to free agency, but we can confidently report that there's zero truth to those rumors. Anthony will still be a Knick on Friday...but whether he remains a Knick next season is still anybody's guess.

Jordan Hill is being pursued by several teams in search of frontcourt help, and the Brooklyn Nets have emerged as the frontrunner for his services.

There's still no word on who could be headed the other way, but the Nets aren't worried about salary cap concerns - they can use the Disabled Player Exception they gained when Brook Lopez went down for the season to absorb Hill's $3.5m salary.

Spurs Rumors: Will Tim Duncan Retire at the End of the Season?