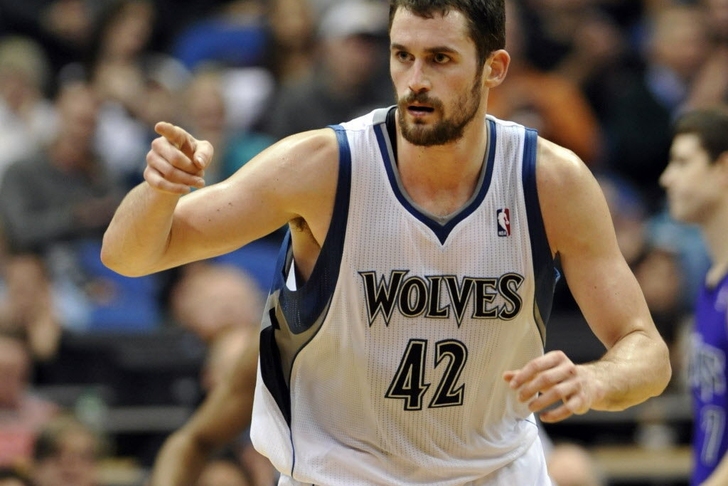 Now that the dust from the NBA Finals has settled, Lakers rumors are back out in full force - we're here to separate the fact from fiction. With the Lakers looking to retool their roster in a serious way, stars like Kevin Love, Carmelo Anthony and LeBron James have all been mentioned as possible additions in LA. What's actually going down? How close are the Lakers to making moves? Read on...

There's no sugar-coating it - Kevin Love wants out of Minnesota. He'll either be gone this summer, or he'll spend a miserable year up north as the Timberwolves make yet another run at the 8 seed.

Love wants to be a Laker, and the Lakers want him in LA. Our source was adamant that nothing was in the works and the Lakers would wait for Love to become a Free Agent in 2015...up until about a week ago, when suddenly they refused to mention him at all. This coincided with reports that a number of teams are willing to deal for Love even without a guarantee that he'd re-sign.

It seems like the Lakers, afraid of missing out on Love now, are weighing up a move. With first-round picks in this year's draft and 2015, the Lakers have ammunition if they want to make a deal - the real challenge, though, is convincing Minnesota that the Lakers' offer is better than whatever is on the table from Golden State, Boston, or elsewhere. The Warriors currently lead the Love sweepstakes now that they're willing to part with Klay Thompson...so the clock is ticking.

Even though Love wants to be a Laker, this summer's decision will come down to the Timberwolves' front office.

It won't surprise anyone when Carmelo becomes a Free Agent this summer - unless Phil Jackson and the Knicks can conjure up some All-Stars out of thin air, Anthony is on his way out of New York. LeBron James could also opt out and test the free agency waters...and the Lakers are closely tracking both players as they try to decide on their next steps.

Since James is still a long way off from making a decision, the Lakers have only had very early discussions about luring him to Los Angeles. We expected the team would either key in on Carmelo early or stay out of the 'Melo race to leave cap in case James became available...but there's a fascinating scenario in play here that should have Lakers fans drooling.

If the Lakers can somehow jettison cap space and get Kobe Bryant to take a pay cut, it's financially possible to fit Kevin Love, Carmelo Anthony and LeBron James on the same roster (with Kobe still around on the veteran's minimum). If Kobe could instantly turn the Lakers into title favorites by taking a pay cut...don't you think he'd at least consider it?

This is all pure speculation, and there are an almost infinite number of things that could prevent it, but the Lakers' front office is nothing if not ambitious. Stay tuned.

What's Up With The Coaching Search?

The Lakers are intentionally delaying the coaching search as part of their bid to lure Carmelo and LeBron to LA. The last thing the front office wants is to hire someone who free agent superstars don't want to play for...and if you're a top free agent, are you really going to get excited about Kurt Rambis?

The Lakers identified several targets early - Chicago's Tom Thibodeau and Kentucky's John Calipari both didn't work out, leaving the team short on marquee options. As things stand, Byron Scott and European legend Ettore Messina are both options, but we're unlikely to see any forward movement in the coaching search until LeBron and Carmelo decide on their future.

LaVine, a UCLA product, made a major impression on the Lakers during workouts. His freakish athleticism and physical tools make him an intriguing prospect, and we wouldn't be surprised at all if the Lakers end up taking LaVine with Randle still on the board. At this point, it'll all come down to who can make a more convincing case in the days leading up to the draft.

For all the latest LA Lakers news and rumors, make sure to sign up for a free Chat Sports account and follow our Lakers page today.