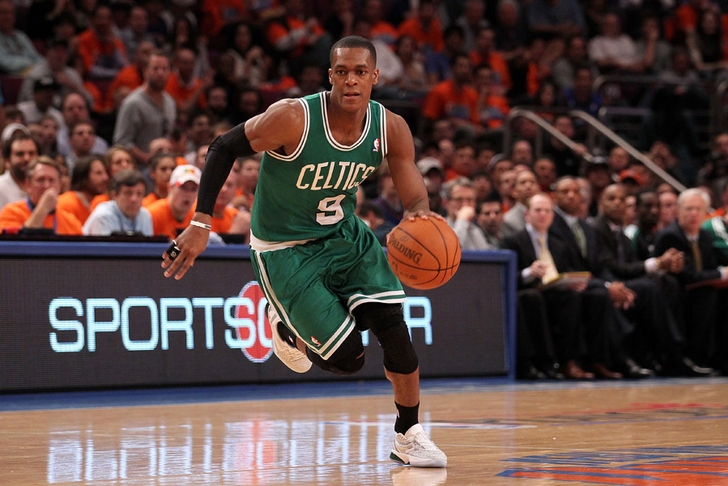 Buried in a Sports Illustrated article going over Kobe Bryant trade options (check back to our Lakers page for more on that later), there's a very interesting (and important) nugget: several rival executives think the Lakers are gearing up to make a serious play for Boston's Rajon Rondo next summer.

This should come as a surprise to absolutely no one. Rondo is 28, will be a free agent, and the rebuilding Celtics have a ready-made (and much cheaper) replacement waiting in the wings in Marcus Smart. The Lakers aren't interested in a drawn-out rebuilding period - they want to get back to the playoffs soon, and that won't happen with the point guards currently on the roster.

Jeremy Lin has shown that he can contribute for the Lakers going forward, but there are serious doubts about his viability as a starting NBA point guard. Steve Nash probably won't suit up for the Lakers again, and none of LA's other options at point have flashed starting potential. Rondo will be the best PG available next summer, and bringing him to Staples Center would show other marquee players that the Lakers are back in business.

The Sports Illustrated article backs up rumors we've heard as well - the Lakers supposedly have a list of targets to pursue through trades and free agency, and Rondo's name is reportedly at the top.

There are two problems with bringing Rondo to Los Angeles. The first is the possibility that he might not be there at all - it's in Boston's best interest to get something back for Rondo rather than lose him for free, and the Celtics are expected to shop him ahead of February's trade deadline. If Rondo goes to another team and signs an extension there, that takes him off the market before LA (which doesn't have the trade chips to realistically pursue him at the deadline) can get there. The second problem is similar - the Lakers won't be Rondo's only suitors next summer, and Los Angeles just doesn't have the trade assets that other teams in similar positions do right now. While they arguably have more to offer than a mid- or small-market team (and don't have any financial restrictions, either), there's no guarantee that Rondo chooses Los Angeles over a place like Dallas or New York.

However it plays out, Rondo is a definite target for the Lakers. If they can make a move happen through a trade or through free agency, one of the biggest problems facing their rebuilding effort - the lack of a playoff-caliber starting point guard - will be history.