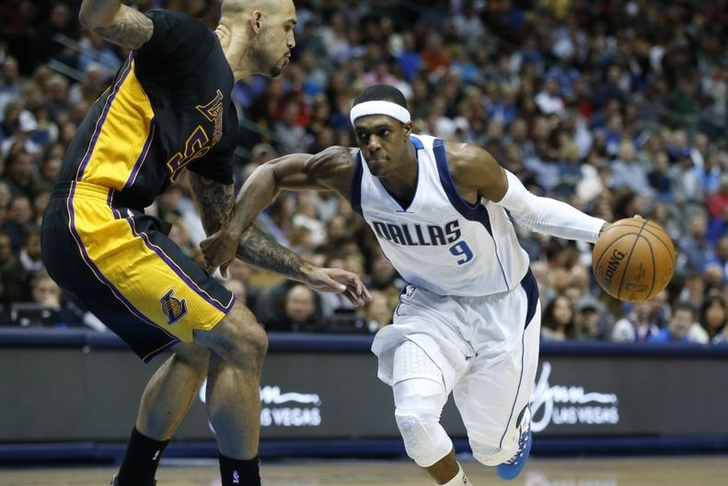 The Los Angeles Lakers are hoping to get a top-five pick to help their rebuilding effort, but they also want to quicken that rebuild by landing a top free agent. Here are five players we think they’ll make a run at on the open market:

Kobe Bryant and Rajon Rondo are good friends, and they haven't been shy about their desire to play together. The Lakers really wanted to find a way to trade for Rondo early in the season, but the Celtics dealt him to the Dallas Mavericks. Rondo possesses the killer mentality Kobe loves, and his pass-first play style would attract other free agents to the Lakers. Rondo will have several suitors on the open market, but Los Angeles is at the top of his list.

Aldridge doesn’t appear to be going anywhere, but that doesn’t mean he’ll be short on suitors. He’s averaging over 23 points and 10 rebounds per game while playing through a thumb injury that will need surgery in the offseason. Aldridge will get max offers from every team – the Spurs, in particular, are very interested in him – but it will take a sweet offer to lure him away from Portland.

Butler is a restricted free agent, and while the league’s Most Improved Player will obviously be offered a max contract by someone, Chicago will (probably) do whatever it takes to make sure he stays with the Bulls. The Lakers will still throw everything they have at him, hoping to attract one one of the league's brightest stars to Hollywood. The Lakers tried to land Dragic at the trade deadline, but they just didn’t have assets and the Phoenix Suns traded Dragic and his brother, Zoran, to the Miami Heat. However, Dragic has said that he sees the Lakers as "a perfect fit" and loves the thought of joining them in free agency. He's not the kind of player that will turn the franchise around, but was named to the All-NBA Third Team in 2014 and would give the Lakers a true backcourt threat next to Kobe. Monroe hasn’t wanted to commit to Detroit long-term, and he'll be looking elsewhere in free agency. Los Angeles needs to find someone to pair with first-round pick Julius Randle, and Monroe's athleticism and passing ability would make him a perfect fit. Monroe isn't a max player and would save the Lakers some money while still getting a really productive big man.