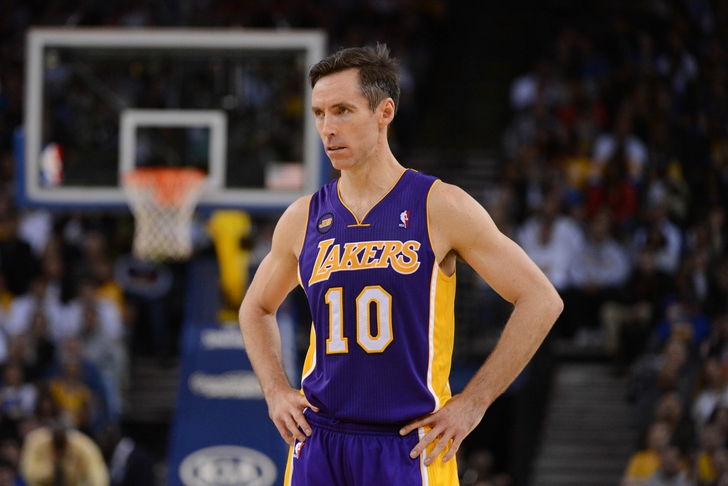 Lakers rumors are getting crazy as we approach the February 20th NBA trade deadline, but today the Los Angeles Lakers' rumor cycle is focused directly on 8-time NBA All-Star Steve Nash and his career plans at season's end.

"Steve Nash finally made it back to the Lakers and has told a few friends this is going to be it, even though he has one season to go on his contract, at $9.7 million. Nash, who turned 40 Friday, doesn’t expect to help much, but that’s been the story of his injury-plagued Laker career. He really missed the camaraderie with his teammates when he was out for three months with a nerve injury in his back, and says he wants to experience that for at least the last part of this season before he calls it a career.”

The interesting part about all of this, as LakersNation.com's Twitter account reported just a couple hours ago, is that Nash came out almost right away, and straightforwardly refuted the claim--

"Steve Nash just clarified that there was no truth to the reports/rumors that suggested he was ready to stop playing basketball after this yr."

This wouldn't qualify as the first time during a season that an athlete has denied retirement rumors in order to limit locker-room distraction, so we here at Chat Sports will be following the "will he?/won't he?" speculation as the final two months of the NBA regular season work their way to a close.

Nash is probable for Tuesday when the Los Angeles Lakers host the Utah Jazz, after experiencing tightness in his back and nerve irritation in his left leg stemming from a collision with Chicago Bulls' guard Kirk Hinrich in the Lakers' 92-86 loss to the Bulls on Sunday.

All of the latest Lakers rumors and news hit first here at Chat Sports. Follow our Lakers team page today.