Lakers News: Magic Johnson Questions Whether Jim Buss Can Turn The Lakers Around 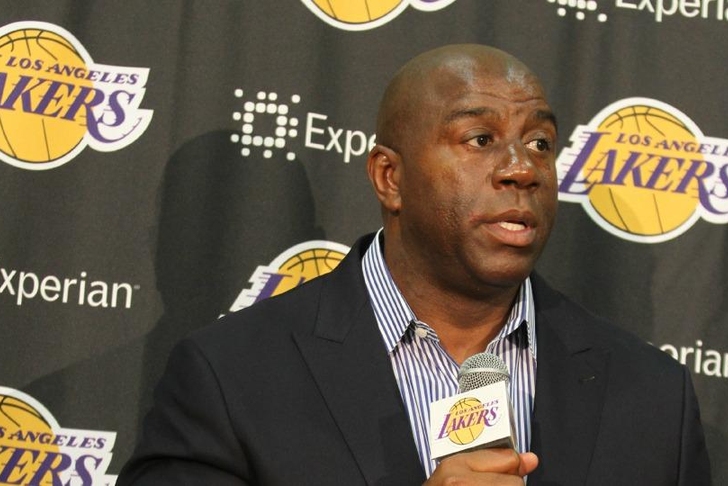 Lakers legend Magic Johnson is not at all happy with how the team is doing lately, and he hasn't been shy about sharing his thoughts in several recent interviews. Johnson appeared on ESPN's First Take Tuesday and did some venting - primarily aimed at the man running the show, Jim Buss:

"Jim is trying to do it himself and trying to prove to everybody that this was the right decision that [his] dad gave [him] the reins," Johnson said. "He's not consulting anybody that can help him achieve his goals and dreams to win an NBA championship."

"If Jim would say, 'OK, Mitch [Kupchak]. You run the show,' I think it would be a lot better for the Lakers, too. Mitch Kupchak knows what he's doing. He's great. He's smart. He's hard-working. He's at every practice. I think the fans would feel good [if he ran the team] as well,"

"If he doesn't have a big summer with a free agent," Johnson said, "it looks like they'll have a good draft pick. Put that together with a good free agent, you can be right back into the mix. If this summer, that doesn't happen where they can sign a great player, it's over for us."

"And I really believe this: [Kobe] should ... say to Jim and them, 'Look, if you don't sign one of these free agents [this offseason], man, I'm just not going to play next year. You almost gotta say that because if you come back with the same level of talent, you're just going to have the same results," Johnson said. "You know, so, look, Kobe, put pressure on Jim to say, 'Look, man, you've got to bring me some talent, some help, so that this can be a great season for the Lakers and a great season for me, being my last season, and then I can retire.'"

The Lakers are currently 13-39, and they're just two games ahead of the Minnesota Timberwolves, who sit in last place in the Western Conference. Wednesday evening's game against the Portland Trail Blazers will be the Lakers' last game before the All-Star Break.