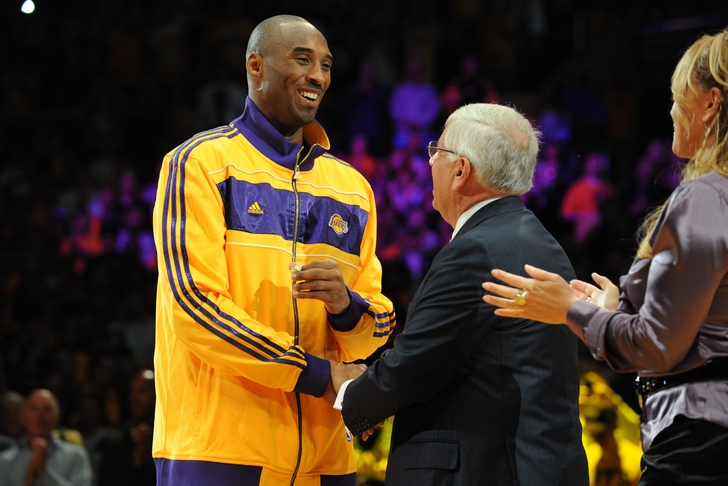 Despite all the negative Lakers news lately surrounding the Los Angeles Lakers' 3-17 record over the past month or so, Lakers general manager Mitch Kupchak was good spirits today while discussing the accomplishments of soon-to-retire NBA commissioner David Stern.

In an interview with Drew McMenamin of ESPN Los Angeles on Thursday, Kupchak spoke warmly of the work commissioner Stern has done during his 30-year tenure as the NBA's main man--

"He’s done so much more good for this organization and in this city than people could ever measure, in the long run.” Kupchak went on to add that "anything that's taken place that can be conceived or be construed as not good will be in the rearview mirror and something good is going to happen down the road."

Stern's tenure as NBA commissioner has had its share of controversy, but it is safe to say that his work has been critical in lining NBA owners' pockets with billions of dollars in franchise value appreciation, television revenues, and the like.

The Los Angeles Lakers have won the NBA championship eight times in the thirty years David Stern has been NBA commissioner, the most of any team in the NBA during that span.

Get your Lakers news and rumors 24/7, 365 days a year at Chat Sports. Follow our Lakers team page.