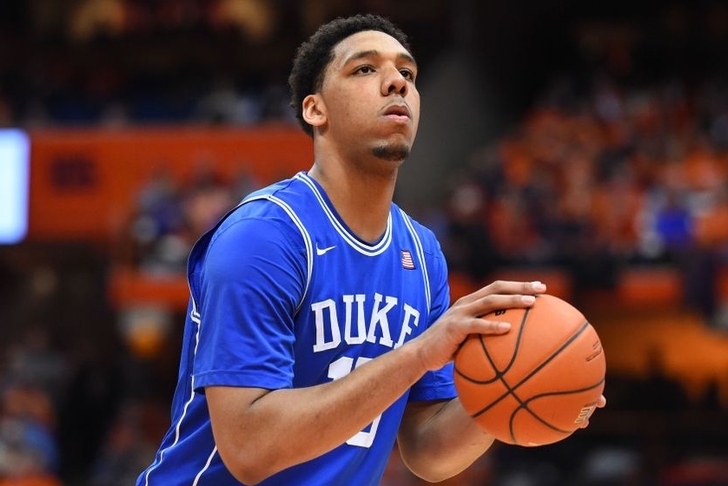 The Los Angeles Lakers hold the No. 2 overall pick in the NBA Draft, and there has been a lot of clutter to sort through as to their plans with the pick. Here are three rumors you need to know:

Is Kristaps Porzingis Actually In Play With #2 Draft Pick?

According to Marc Stein of ESPN.com, 7’1″ international prospect Kristaps Porzingis is rising fast and could be a top-three selection when the dust settles at the draft:

Draft scuttle: Hearing Porzingis not only in play for Philly at No. 3 but now giving Lakers something to ponder at No. 2. Stock rising fast.

This could very well be a risk/reward scenarion for the Lakers. Towns and/or Okafor are being billed as surefire NBA talents while Porzingis’ game is considers much more raw and harder to quantify at this point.

However, Porzingis’ range as a shooter and ability to attack the rim could be enough to convince the Lakers to at least take a long look at the 19-year-old.

The Los Angeles Lakers are currently assessing all potential options when it comes to their second pick (#27) in the 2015 NBA Draft, including trading up in hopes of perhaps landing a coveted wing player somewhere farther up the board.

Here’s Steve Kyler of Basketball Insiders with the report:

League sources say the Lakers are interested in trading this pick if only to avoid the guaranteed salary associated with it. There has also been talk of bundling this pick with other assets and moving up, so this selection is clearly in flux.

Rumors have been swirling as of late that the Lakers are trying to offload sixth man Nick Young via trade, so it’s possible that they could consider a package deal including Young in order to move up the draft board.