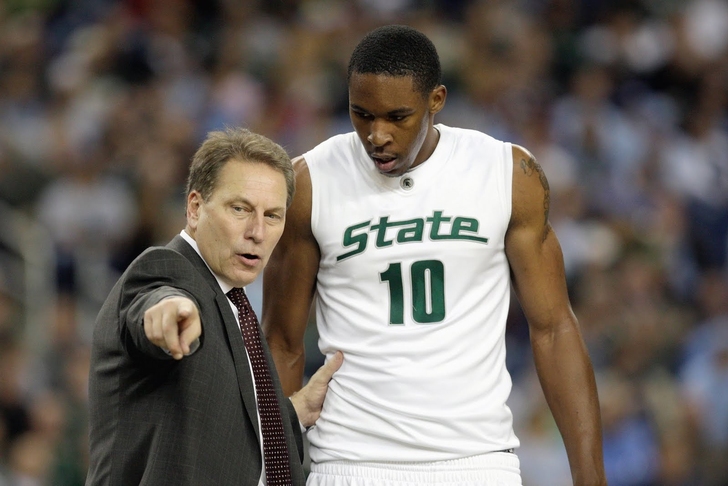 Tom Izzo is a Lakers coaching target regardless of his recent protestations that he is a Michigan State Spartan through and through and that he will be returning to the program for the 2014-15 NCAA Men's Basketball season. Izzo considered the Cleveland Cavs' opening back in 2010, going through an extensive process of reflection before deciding to stay in Lansing. If Jim Buss is willing to offer Izzo both a blockbuster salary and firm control over basketball operations, don't be surprised if Izzo's tune changes dramatically.

If that was all this section said, you would still pretty much know that he is a perpetual front-runner for any top job that opens both in the NCAA and the NBA. In his 19 years as the head coach of the Michigan State Spartans, Izzo has the 2000 National Championship to his credit along with six Final Fours, seven Big Ten regular-season championships, four Big Ten tournament championships, and four national coach of the year awards.

Izzo is the Kevin Bacon of college basketball. Many of his assistants have gone on to be successful head coaches at other Division I institutions, and his 17-year streak of NCAA Tournament appearances has raised both his star and the program's recruiting prowess exponentially.

Izzo's teams crash the boards relentlessly and lock down on their defensive assignments in such a way that his Spartans teams may be the primary reason why Big Ten basketball is known for low-scoring brawls down in the post.

Izzo's doghouse can contain everything from the biggest stars to loafing role-players (along with assistant coaches), as his defensive schemes require maximum precision and attention to detail in order to work efficiently. Take Alabama Crimson Tide football coach Nick Saban's take on Izzo's drive and determination: “Let’s get this straight, Tom Izzo is a football coach who coaches basketball,” said Saban via the New York Times, drawing on the close relationship the two built when both were assistant coaches in their respective fields at Michigan State. “When you’re assistants at the same time, misery can love company. You learn about a man then. He’s as tough as they come.”

Izzo's toughness shows itself in relentless practices focused on rebound positioning, along with extremely intricate offensive sets which show multiple looks to opposing defenses in the span of one or two possessions. When you feel like you have a handle on what Izzo is implementing, he'll reach to the bench is such a way as to expose opposing coaches' misplaced confidence in their reads.

Izzo and his amazing resume' would command respect from day one, and his attention to detail would gain him an instant supporter in Kobe Bryant. Izzo would add structure and dimensionality to an offense which, while explosive at times under Mike D'Antoni, ended up hamstringing the defense by leaving the team woefully out of position on the other end.

Izzo is the closest thing to a well-rounded system coach as you're ever going to find. The star which he has built for himself over two decades at Michigan State would serve him well both in the media and in luring prized free agents to Hollywood. If the team is capable of putting individual egos aside to work as a well-oiled machine under Izzo, he has all of the tools necessary to turn around the Lakers' entire franchise -- and quickly.