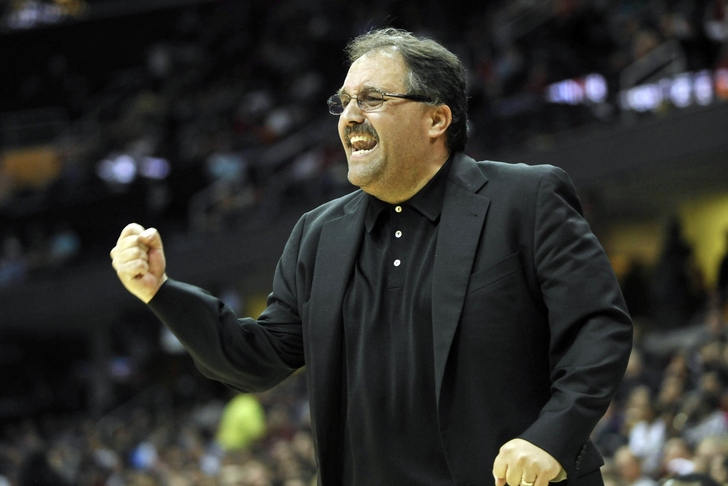 Per Marc J. Spears of Yahoo! Sports, potential Lakers coaching target Stan Van Gundy is "not expected pursue the Lakers coach opening." However, a job like the Los Angeles Lakers head coaching position will be hard to beat for the former Miami Heat and Orlando Magic head coach -- meaning there is no reason to count him out yet despite initial reports of his disinterest.

While that has translated to only a 48-39 playoff record and one NBA Finals appearance (2008-09 with Orlando) in parts of eight seasons on the sidelines, Van Gundy has twice been named head coach of the Eastern Conference NBA All-Star team (2005, 2010) -- along with being named Eastern Conference Coach of the Month on six occasions.

Stan Van Gundy is stubborn, relentless, defensive-minded -- perhaps everything that the perception of former Lakers head coach Mike D'Antoni was not. Rather than predicating his offense on guards breaking out and creating in transition, Van Gundy runs his offense through his bigs, especially when he can force one-on-one match-ups down low for a beast like Dwight Howard:

The stretch four is also critical to Van Gundy opening up isolation looks in the post. In Orlando, Van Gundy used Rashard Lewis's ability to shoot all over the court (especially from three) to both increase the value of the Magic's pick-and-roll offense and to get Howard clean looks down low.

How he'd fix the Lakers:

Mike D'Antoni wanted Jordan Hill to become a stretch four, and the worrisome part is that Van Gundy would most likely tab Hill (if he stays) or Ryan Kelly for a similar role. However, hiring Van Gundy could give the Lakers a legitimate shot at retaining someone like Pau Gasol -- who could see plenty of looks in an offense which, while adhering to similar tenets of floor spacing and shooting like D'Antoni's offense did, is set up to give a big like Pau clean one-on-one chances down low.

However, the biggest thing that Van Gundy would bring to the table is unabashed defensive focus. The Los Angeles Lakers finished 28th in John Hollinger's defensive efficiency rating in 2013-14, giving up a staggering 109.2 points per game (29th). Van Gundy would drill both the youth and the veterans on the Lakers' squad without fail in defensive spacing and understanding of assignments -- or he would do his best to find guys who can bring it on both ends of the court via the draft and free agency.

The Top 5 Lakers' Coaching Candidates As Of 5/3

Seven Coaching Candidates Who Can Take Over For Mike D'Antoni Tomorrow

Keep an eye on every Lakers coaching target as the team searches for Mike D'Antoni's replacement. Download our new Chat Sports iPhone app and follow our Lakers team page today.