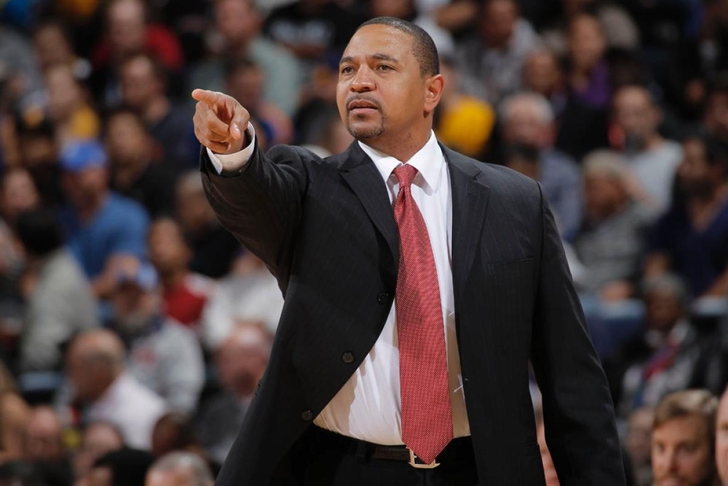 If the Golden State Warriors decide to part ways with Mark Jackson after the 2014 NBA Playoffs, you better believe that Jackson will find himself as a Lakers coaching target in their search for Mike D'Antoni's replacement. While garnering critics for perceived underachievement by the 2013-14 Warriors, Jackson has ushered in a majorly positive cultural shift both inside the franchise and from a fan interest standpoint.

Aside from his days as "Action" Mark Jackson, dishing out dimes left and right (4th all-time with 10,334 assists), Jackson's resume' is in its infancy as an NBA head coach. After a dismal 23-43 record during the last year of the Monta-Ball era of Warriors basketball in 2011-12, Jackson has led the Warriors to back-to-back playoff appearances for the first time since 1990-91 and 1991-92.

In a far cry from the pinball numbers racked up in both points-for and points-against by a coach such as Warriors legend Don Nelson, Mark Jackson is a defense-first head coach who uses his past life as an NBA star to reach players on their level -- rather than using the bullying approach which soured him on then-New York Knicks interim head coach John MacLeod some 23 years ago (per Marc J. Spears of Yahoo! Sports) :

To understand Jackson's coaching style, you have to go back (to) when he caused a stir in New York after publicly criticizing then-Knicks interim coach John MacLeod, who relegated him to backup with limited minutes behind veteran Maurice Cheeks. In response, Jackson said that MacLeod and then- general manager Al Bianchi "pointed their finger at my chest, cussed me out and disrespected me" while he stretched with teammates before a practice.

For better or for worse, Jackson is a friend to his players off the court -- cultivating an "us against the world" mentality which bleeds into his defense-to-offense philosophy in such a way that you are just as likely to see a Warriors player scream after a well-executed defensive stop as after a highlight reel dunk.

Jackson is also a huge proponent of the 1-5 pick and roll, opening attack lanes to the basket while freeing up shooters in the corners. Other than that, its isolation, isolation, and more isolation -- a philosophy which has earned him as much ire as praise from the powers than be which surround him.

Defense, defense, defense...sprinkled with belief, belief, belief. Kobe would respect Jackson for his time served as an NBA player along with his players-first mentality -- which could act as a way of keeping Kobe very happy in his role as a floor general and locker room leader.

Rather than looking to win every game by a 120-114 count, the Los Angeles Lakers personnel on staff would have to learn the increased of points-denied turned into points-for, making sure to run back into every defensive set. That, or the Lakers would be doing a ton via the draft and free agency.

Also, Kobe will get close to 20-25 isolation looks a game, which he won't complain about.

If Jim Buss is to hire (a recently-fired) Mark Jackson, it will most likely be will be due to Jackson's role in the growth process of guards such as Stephen Curry and Klay Thompson -- perhaps hoping that some version of that magic will strike twice with a guy like Kendall Marshall or (perhaps) Jodie Meeks.