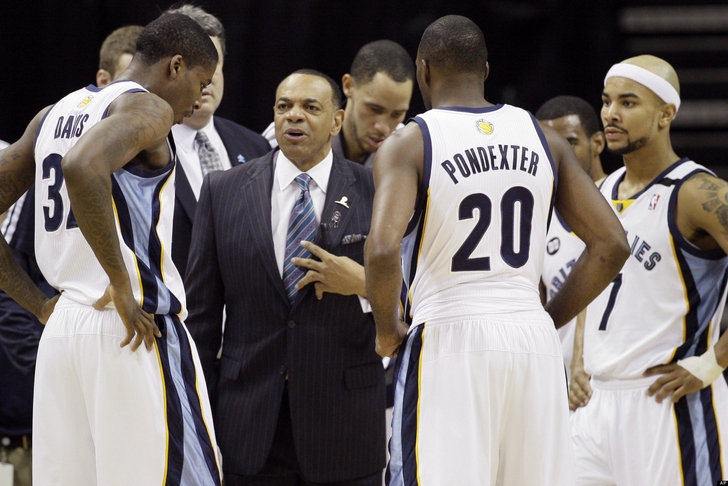 If Lionel Hollins wants to emerge as a true Lakers coaching target, he may need to prove that he can play well with others. Hollins has been known to balk at both advanced stats and working closely with executives on the basketball side of things, meaning that he may have to show willingness to alter his approach in order to emerge as a viable option for the Lakers' head coaching job this spring.

However, the work Lionel Hollins did to build this current incarnation of the Memphis Grizzlies into a year-to-year contender in the NBA Western Conference can't be denied. Hollins improved his regular-season winning percentage each season from 2008-09 (.333) to 2012-13 (.683), showing a steady hand while aiding/accelerating the growth of current Grizzlies stars such as Marc Gasol and Mike Conley. Hollins' last season with the team in 2012-13 qualified as his very best -- leading the league's 2nd best defense (from a defensive efficiency standpoint) to a 56-26 record and a Western Conference Finals appearance.

If you aren't familiar with Memphis Grizzlies basketball under the tutelage of Lionel Hollins, you are most likely part of the majority who don't consider 77-71 all-defense barnburners as entertaining NBA basketball. Hollins is as system coach through and through, posing an almost diametric opposite to a coach such as George Karl who places extreme effort over intricate pick-and-roll defense and on-the-ball switches.

Hollins wants every screen that an opposing offense attempts to set to land the ball handler somewhere near the baseline -- limiting space for offensive playmaking and allowing Hollins' defense to collapse on the ball. The former Memphis Grizzlies head man helped mold Marc Gasol into an intuitive reader of opposing pick-and-rolls -- trusting Gasol to drop back to the post or come up high depending on both instinct and lighting-quick information processing.

Defense-to-offense is critical to Lionel Hollins' coaching philosophy. He never had a legitimate perimeter threat, with Mike Miller both predating and postdating his tenure with the team. The two-way development of both guard Mike Conley and center Marc Gasol was critical to the Grizzlies scoring just enough to match wits with their all-world defense. A center (or perhaps a stretch four) must be a every-touch offensive threat in order for Hollins' offensive scheme to hum without any hitches to its giddy-up.

If Lionel Hollins can turn Marc Gasol into a lethal two-way threat, imagine what he could do with a rejuvenated and interested Pau Gasol (providing he'd return to play for such a hard-line coach). The Lakers' offense may lose a little bit of its punch, punch, counter-punch luster under Hollins -- which might not be a bad thing if the defensive commitment rises dramatically in its stead.

Hollins would need to challenge himself to grow as a coach and as a politician at 60-years-old, learning to both play the game under the spotlight of the Los Angeles media along with recalibrating his offensive philosophy to get more ball-handlers more efficient looks -- especially from beyond the three-point line. If Hollins can prove that he can be as deft from a two-way perspective as he helped teach Marc Gasol to be, the Lakers (led by a healthy Kobe Bryant) could use his hyper-focus on defense to wipe away the inefficiencies of Mike D'Antoni's run and gun offense.