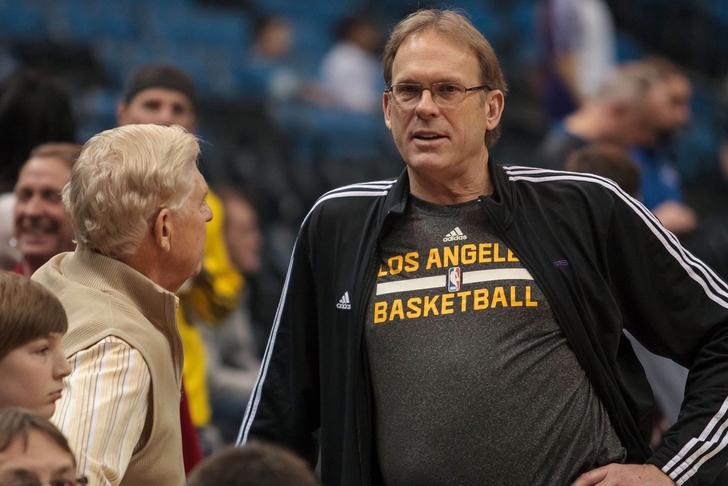 Kurt Rambis is as deserving of being a Lakers coaching target as anyone, based both on his work as an assistant with the team and for the raw deal he received in two tough years at the helm of what was of an all-flash, little-substance Minnesota Timberwolves team from 2009-11. Kurt Rambis is a direct link back to the glory days of Phil Jackson and his familiarity with both Kobe Bryant and the entirety of the Los Angeles Lakers' organization may serve him well during Jim Buss' search for Mike D'Antoni's replacement.

It depends on how you look at it.

You could very well point to Rambis' 32-132 record with what amounted to a mid-level pickup basketball team during Kevin Love's first two years in Minnesota and say "gulp."

However, you can also look at the admirable job Rambis did in the stead of Del Harris during the lockout-shortened season of 1998-99. Rambis turned a sputtering 6-7 team still dealing with growing pains around, going 24-13 and leading the Lakers to a Western Conference Semifinals appearance (where they were promptly dispatched by the Spurs...but no one was toppling that Spurs team who lost only two games en route to a championship.)

It's Rambis' work as both an assistant general manager and an assistant coach under Phil Jackson which should turn the most heads -- aiding the Zen Master in the Lakers' run to four NBA titles and six NBA Finals appearances from 1999-2009.

Kurt Rambis is a talent-oriented coach, willing to go run-and-gun with young legs, while well-versed in the slow-down process of the triangle offense due to his time under Phil Jackson. Rambis has an impressive background in player development, and is especially adept at getting the most bang for his buck out of big men in the post.

For all of the negativity surrounding his two years in Minnesota, Rambis' work with Kevin Love in his first two season can't be denied...even if Love is the one doing the denying.

Out of everyone on the Lakers' shortlist, Kurt Rambis is perhaps the most flexible tactician of the bunch. Rambis has seen (and helped to employ) both guard-centered and big man-centered offensive schemes, and puts in hours and hours in the video room in order to correct inefficiencies on the defensive side of the ball.

No one outworked Kurt Rambis as a player during the "Showtime" era of Lakers' basketball -- and very few can match his work ethic as a coach as well.

The Lakers were originally looking to maintain some sort of continuity going into 2014-15 by at least giving Mike D'Antoni one more shot at turning the boat back around in Los Angeles.

Rambis would give the Lakers the best of both worlds: continuity from an organizational and player familiarity standpoint, along with a chance to fully revisit some of the philosophies and schemes which worked so well with Phil Jackson at the helm.

Rambis has the locker room already, and has the respect of everyone from Jim Buss to the casual Lakers fan. Hiring him would represent a bridge from the Lakers' past to their potential future -- providing that Kevin Love will be okay with a return engagement with his former coach come free agency in 2015.