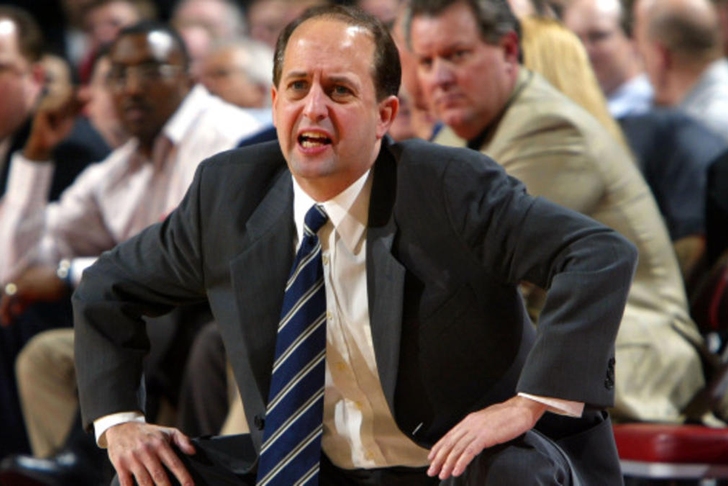 Jeff Van Gundy's status as a Lakers coaching target is as volatile as his public persona and coaching style. There aren't many names on the list who combine both notoriety and proven success in such a "ready for the microscope of a big market" kind of way. However, Van Gundy has a way about him which draws a sharp divide between his supporters and detractors -- a combustible trait which could end up going very badly or very well, with little chance of any in-between.

Fun fact #3: Van Gundy's has just one losing season (2005-06 with the Houston Rockets) in eleven years on NBA sidelines. Why doesn't he have a job again?

If you're noticing a trend when it comes to defensive-minded coaches being coveted by the Lakers, it's for good reason. The Lakers were a mess defensively last season both in defensive efficiency (28th) and points allowed (29th), relying on engaging in and winning shootouts to limited success.

This would not fly with a coach like Jeff Van Gundy, who uses his very distinct no-nonsense "leader of men" mentality to extract maximum effort from both superstars and role players on both sides of the court -- especially on defense. Van Gundy is the epitome of a Pat Riley-guy, having learned his mentor's propensity for giving players no other option but to buy in to what he is selling.

Van Gundy has learned the value of practice and studious defensive scheming because he had to with the lack of superstar oomph which has graced most of his squads. For example, his third best scoring option during most of his time in Houston was Rafer Alston. No knock on Alston, but Van Gundy was forced to draw every drop of commitment out of what amounted to limited talent both in New York and Houston -- with admirable results more often than not.

Seeing what Van Gundy has done with relative talent constraints over his eleven years as an NBA head coach, having a recommitted Kobe Bryant, a presumably healthy Steve Nash, along with the cap space and lottery pick to find true "Van Gundy guys" that will respond to the fire and brimstone he can bring day-in and day-out -- it could very well be a match made in Laker heaven.

Van Gundy would use his ego to hip check other egos to the boards, and quite possibly may be the best option on the Lakers' list when it comes to how a coach can handle the pressure of one of the capital-B Big jobs in the NBA. Van Gundy left the Knicks with unfinished business -- and this may be the job he been waiting for in order to make the leap from good to great.