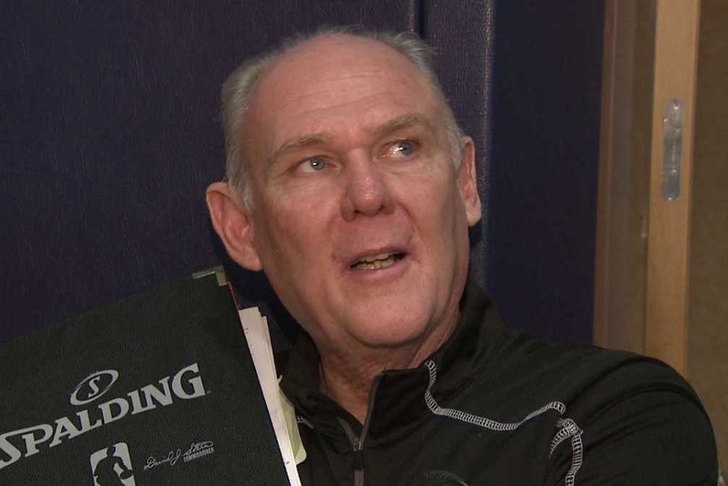 A 25-year veteran of the NBA sidelines, Lakers coaching target George Karl is already a legend of the game -- despite zero NBA championships to his credit. The Lakers could present the right mix of opportunity and intrigue for the soon-to-be 63-year-old Karl to make the jump to the first "big-market" of his storied NBA head coaching career.

Despite an 80-105 overall record in the NBA Playoffs, there are very few head coaches in the history of the NBA who can boast a record as consistent and sterling as that of George Karl.

Karl is sixth all-time on the NBA wins list at 1,131. The guys that he trails are a "Who's Who" of NBA head coaches: Don Nelson, Lenny Wilkens, Jerry Sloan, Pat Riley, and Phil Jackson. Karl is currently riding a 21-year streak without a losing regular season, with just one of those 21 seasons ending in a .500 record (2001-02 with the Milwaukee Bucks.)

The ageless Karl also picked up his first NBA Coach of the Year award in May of 2013 ... one month before he was fired by the Denver Nuggets after asking for a contract extension.

George Karl requires his teams to be in extraordinary physical shape, consistently pushing the pace in an effort to get as many looks close to the rim in transition as humanly possible. Karl is an implied max effort coach -- meaning that any loafers by trade are going to be called out and quickly by the coach who was originally dubbed "Furious George" in his younger and more abrasive days.

Karl has calmed down over the past decade or so, but still adheres to the mantra "respect the game." As ESPN.com's Beckley Mason points out, Karl wants "30 free throws, 30 layups and 30 assists every game, which reflects his core beliefs in ball movement, pushing the ball quickly up court and driving to the rim." He also abhors long two-point shots for their lack of efficiency and value-added for distance increased.

Karl's defensive philosophy mirrors the controlled chaos and maximum effort mindset of his offensive leanings. Karl's early Sonics teams were gritty and unforgiving down low. He has balanced his approach in recent years, giving opposing offenses multiple looks on ball screens in order to confuse ball-handlers and limit options in the half court -- rather than just bruising and beating teams into submission.

In a word -- passion. The biggest non-technical knock on former Los Angeles Lakers head coach Mike D'Antoni was a perceived lack of passion exhibited both in front of the cameras and out of the spotlight.

While perception doesn't always foretell truth, it can mean a heck of a lot when it comes to how hard a team works at doing the little things right, especially on defense.

George Karl would immediately have the respect of every Lakers player in the locker room and every executive and assistant coach aiding him in his work. Players whose main objective is to win will buy in to Karl's "players' coach with a caveat" style. Kobe Bryant would find a kindred spirit with whom to challenge anyone and everyone who doesn't get back on a defensive assignment due to a lack of focus or energy -- and if Kobe's happy, it usually means great things in Lakerland.

The Top 5 Lakers Coaching Candidates As Of 5/3