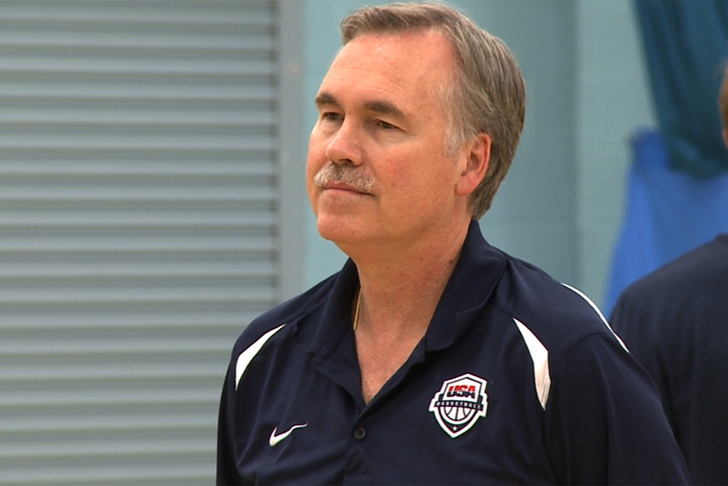 As Lakers coaching rumors continue to swirl both in the media and around the Los Angeles Lakers themselves, key names associated with the team's search for Mike D'Antoni's replacement have already been ruled out. However, new names to consider are popping up daily -- leaving a wealth of possibilities open for Lakers president of basketball operations Jim Buss.

- Mitch Lawrence of the New York Daily News is indicating that Kentucky Wildcats head coach John Calipari has "no shot" to coach the Lakers, and that "Calipari knows the Lakers have zero interest in him."

- Per David Haugh of the Chicago Tribune, "Creative Arts Agency — which represents Thibodeau and free-agent Carmelo Anthony — would prefer their clients collaborate in Los Angeles instead of Chicago." Will it be a two-for-one deal come this offseason?

- According to Eric Pincus of the Los Angeles Times, popular betting website Bovada has posted their own odds regarding the Lakers' head coaching search -- with Byron Scott and Kevin Ollie leading the pack as 7-2 favorites.

Bovada thinks that Tom Thibodeau is a 4-to-1 shot to spurn the Chicago Bulls for the bright lights of Los Angeles -- placing him just behind favorites Byron Scott and Kevin Ollie. For a rumor that seemed so farfetched as recently as this weekend, there sure are a lot of wise guys who believe that the tenuous relationship between Thibs and the Bulls' front office has reached its breaking point. Kobe Bryant's professed admiration for the coaching equivalent of a prized bulldog will also go a long way, provided that the Lakers can sell Thibodeau on the idea of having more control and less constraints passed down from the powers-that-be than what he is dealing with in the Windy City.

You'd think that a coaching legend with two and a half decades of predominantly winning seasons would be getting more run as a potential heir apparent to the Los Angeles Lakers' head coaching job. However, while Karl is slated as one of the team's first interviews for the position, names such as Kevin Ollie and Tom Thibodeau seem to be hogging all of the spotlight. This could prove troublesome for Karl if the Lakers indeed want this hire to be a "splash" from both a coaching and marketing perspective.

Many NBA analysts point to former Lakers players such as Byron Scott and Kurt Rambis as having both the connections to the Lakers and the pedigree in order to succeed under the scrutiny of being "the man." However, Derek Fisher is a direct window back into the most recent era of Lakers' success -- along with having a close relationship with Kobe which could end up drawing the very best out of the ailing superstar over the next couple of seasons. Fisher's on-court coaching mentality will serve him well, and an assistant like Kurt Rambis could very well make his transition into coaching a smooth one.

Don't underestimate Byron Scott's relationship with the late Jerry Buss in the decision-making process of his son, Jim Buss. Also, don't discount the fact that Byron Scott has a proven track record in developing young guards (Chris Paul and (arguably) Kyrie Irving) which could prove very useful for what is an extremely guard-centric roster at this point.

His four years with a Cleveland Cavs team in disarray notwithstanding, Byron Scott helped rebuild two teams (New Jersey Nets, New Orleans Hornets) from the ground up -- and his experience along with his past track record of success as a player in L.A. may be what vaults him to the top of the Lakers' wishlist when all is said and done.

When UConn is reportedly offering to double the salary of a coach who could have just have easily been on the hot seat as in the penthouse with a different result to the 2014 NCAA Tournament, you can tell they are feeling the heat. Kevin Ollie will most likely never be hotter as a coaching commodity than right after leading his underdog Huskies to the 2014 NCAA title -- and may be wise to use that leverage straightaway in order to land one of the most revered posts in professional sports. Whether he does or doesn't, count him as the hire the Lakers both want and feel like they have to make.

Warriors superstar Stephen Curry says that Jackson being in a position "where his job is under scrutiny and under questions is totally unfair." Other Warriors players echo Curry's sentiments about the ultimate players' coach of all players' coaches. However, the dysfunction in Golden State is real between Jackson and management -- leaving him a 50/50 proposition to either stay or be axed. The Warriors' loss however could very well end up being the Lakers' gain -- with several reports surfacing that he would automatically land near the top of the team's interview list if relieved of his duties in Oakland.

Get Lakers coaching rumors as soon as they hit the internet. Download our new Chat Sports iPhone app and follow our Lakers team page today.