Lakers Coaching Rumors: The Top Five Candidates As Of 5/3 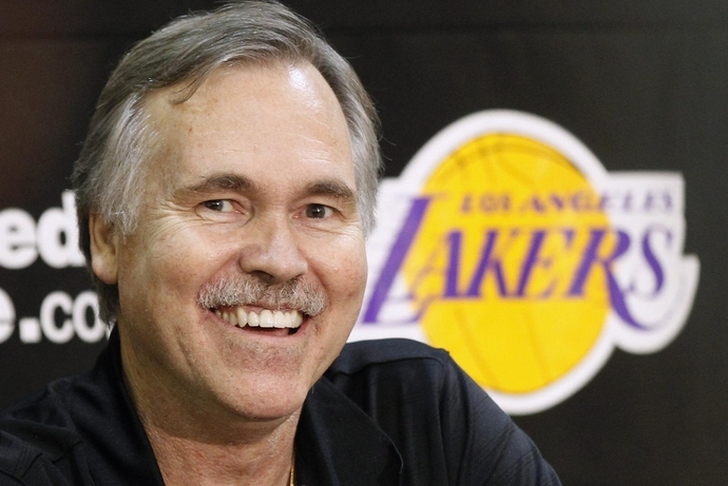 Lakers coaching rumors are in a holding pattern the past couple of days, with news that the Los Angeles Lakers, in the words of the Associated Press, "will take all the time necessary to get it right in owner Jim Buss' first coaching hire since the death of his father, Jerry." What the Lakers believe it will take to "get it right" may be a splashy, high-impact hire ready-made to vault the franchise back to elite status right away.

-According to the New York Daily News, The Los Angeles Lakers have "decided to flood the grapevine," extending their search to fit in as many viable and diverse candidates as they possibly can. This includes two brothers, a few ex-Lakers players, and a college coach who is adamantly denying interest.

- Marc Berman of the New York Post has cited an NBA source as stating that the Lakers believe Steve Kerr is "too far along in talks with Phil Jackson and the Knicks to warrant time and resources in their search", according to Tim Polzer of Sports Illustrated.

- Former Lakers assistant coach and head coaching candidate Brian Shaw is happy with his current post as Denver Nuggets head coach, and will not pursue either head coaching vacancy in Los Angeles or New York.

Jeff Van Gundy remains the wild card in the Los Angeles Lakers' coaching search, with his name seemingly lost in the shuffle behind such names as UConn's Kevin Ollie and the legendary George Karl. As, Ian O'Connor of ESPN.com points out, Van Gundy was the last Knicks' head coach "allowed to speak freely from the beginning to the end of his term, the last one to win consistently and the last one ambitious enough to see a second-round playoff exit as a complete failure." He knows what it takes to win in a big market. A match seemingly made in big-city heaven?

The former Memphis Grizzlies head man has thrown his name into the hat as a potential candidate for the Lakers' job, and could slowly work his way toward becoming a favorite as the process goes on. As pointed out in the video above, Hollins is not afraid to get in players' faces and will demand maximum effort from his guys on both sides of the ball -- something one Kobe Bryant would appreciate wholeheartedly.

Hollins was fired as Grizzlies head coach after a 56-26 record in 2012-13 and a trip to the Western Conference Finals, leaving a chip on his shoulder which could help energize a Lakers team that looked listless and lackluster at times in 2013-14.

Scott is holding steady as one of the top three candidates on the Los Angeles Lakers' current working list of potential hires. There is a vocal segment of the Lakers fan base who believes that Scott should have been the man for the job both when Mike Brown and Mike D'Antoni were hired -- and they continue to express their unwavering support for one of the key tenets of the Lakers' "Showtime" glory days.

Scott will have to prove that his defensive philosophy can both adapt and evolve after his Cleveland Cavs' teams from 2010-13 played sub-mascot basketball D -- a big reason why Scott was 64-166 prior to his firing as Cavs head coach in April 2013.

With George Karl already on the Lakers' docket for upcoming interviews, it looks as if the 25-year NBA head coaching veteran wants his shot at leading the storied franchise back to the top of the NBA mountain. The question isn't whether Karl is a fit for the Lakers -- for as the Los Angeles Times' Mike Bresnahan points out, "he became familiar with the franchise when his son, Coby, played for the Lakers in the 2007-08 season and was one of the few coaches respected by Phil Jackson."

The question is whether or not the soon-to-be 63-year-old is willing to deal with the scrutiny and pressure that comes with being the Lakers' head coach, after two-and-a-half decades spent on the NBA's sidelines.

Here's your splash, Lakers fans. Per a source cited by Mark Medina of insidesocal.com, Ollie will "listen" in regards to the Los Angeles Lakers' coaching job, "but he’s real committed to his alma mater." The 41-year-old Ollie has the fire that the Lakers need, the 13-year NBA pedigree as a player to command respect, and the 2014 NCAA Men's Basketball National Championship behind him to market himself as a top-tier candidate for one of the most revered jobs in all of professional sports.

Unlike Kentucky Wildcats head coach John Calipari, who has seemingly shut the door on the prospect of coaching the Lakers, Ollie has wisely kept his door ajar -- and very well could find himself as the perfect fit for a Lakers front office looking to shake the franchise at its core.

The Los Angeles Lakers are seeking permission to interview him. His defensive scheme helped float a 2013-14 Chicago Bulls squad to home court in the first round of the 2014 NBA Playoffs, despite a team seemingly bereft of offensive punch at times. Kobe Bryant has Thibs on his own personal shortlist for the job, and Tom Thibodeau's respect for the future Lakers' NBA Hall-of-Famer is mutual. It may be a relative long shot, but anything is possible in Hollywood.