Lakers Coaching Rumors: The Top 5 Head Coaching Candidates As Of 5/4 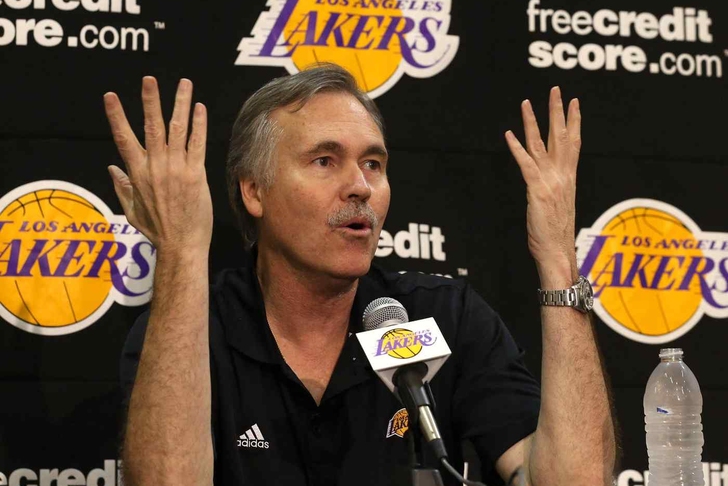 Lakers coaching rumors are starting to heat up surrounding the search for Mike D'Antoni's replacement, with an interesting slew of names being added to the mix which could change thing considerably once interviews are fully scheduled. There are a host of different coaching philosophies for the Lakers' front office and Jim Buss to choose from, so let's take a look at the list of names they have to work with so far.

-With special thanks to Eric Pincus at the Los Angeles Times, here's an interesting list of odds for each potential Lakers coaching candidate -- with Kobe Bryant (?!?!) finding his way on there as a  33-to-1 underdog.

- Per Corey Hansford of Lakers Nation, one of the main reasons that Mike D'Antoni decided to resign may have been because he knew that both Kobe Bryant and Pau Gasol wouldn't sign off on playing for him for another year. The next Lakers coach may need to have one, if not both, in his corner in order to have a legitimate shot of landing the job.

- The Chicago Tribune's David Haugh is advising Chicago Bulls fans to "relax," as he believes that Bulls head coach Tom Thibodeau is "unlikely to go anywhere" despite dissonance between him and the Bulls' front office.

In the span of a few short days, Derek Fisher has gone from a "what if" proposition to a Vegas favorite (3-1 odds from Betfair Sportsbook) to replace Mike D'Antoni as Lakers head coach. Fisher isn't talking about it, especially with his OKC Thunder team preparing for an absolute fight of a second round series against the Los Angeles Clippers. Fisher has stated that this will be his final year as an NBA player, and despite denying interest in coaching, could very well change his mind if a chance to coach his good friend Kobe Bryant seriously presents itself.

Here's the problem for Jeff Van Gundy: his name is big enough to elicit both a solid fan reaction on Twitter to his potential hire along with receiving one of the early interviews that the Lakers will conduct for Mike D'Antoni's replacement. However, if Jeff Van Gundy doesn't present a legitimate "wow factor" in his interview with the Lakers, the giant pool of candidates which contains both storied coaches (George Karl, Italian legend Ettore Messina) and hot young coaching prospects (Kevin Ollie, perhaps Mark Jackson) could swallow his chances whole.

Byron Scott was always one of the late Jerry Buss's favorites, and Scott's connection to the team both on the television side of things and as a former player means that he will get a long, hard look from Jim Buss and Lakers management. However, as Scott so eloquently put it in the proceeding interview, his Cleveland Cavs' teams from 2010-13 "sucked" more often than not -- especially on the defensive side of the ball.

This Lakers team needs an absolute makeover on defense, and Scott oversaw some great defensive teams both in the middle of his tenure with the New Jersey Nets and at the end of his time with the New Orleans Hornets. If that Byron Scott can show up during the interview process, you may be looking at the prohibitive favorite to land the job.

The UConn Huskies aren't letting go of Kevin Ollie without a legitimate fight, with ESPN.com reporting that the university is in talks with Ollie about doubling his salary going forward (from $1.25 million to around $2.4-$2.6 million). One source cited by ESPN says that "Kevin knows he's hot right now," and that "he's not thinking about leaving right now."

Yet, until Ollie comes out and takes his name out of the running, it is still possible that Ollie is using all of his current leverage to pick up big bucks from the Lakers -- especially since there are very few jobs in basketball that can match up with the prestige and legacy-boosting potential of the Los Angeles Lakers head coaching job.

Vegas has him roaming somewhere in the 8-to-1 range (middle of the pack) as the heir apparent to the Lakers coaching job, but 25 years of success both as a mentor and as a hard-lined coach commands both respect and a legitimate shot at his first "big-market" job. Karl hasn't coach a losing team in the regular season since the end of the Reagan administration (1987-88 with the Golden State Warriors). His genuine love and respect for the game is exactly what Kobe Bryant and an impressionable group of youngsters on the Lakers' roster need to turn this ship around from the dark waters of the D'Antoni era.

If you believe everything you hear, Steve Kerr is already the New York Knicks head coach. Or he is waiting on Mark Jackson to get fired in order to take his best shot at the Golden State Warriors job. However, the Los Angeles Lakers present both a job close to home for the San Diego resident and the lottery pick/cap space necessary for Kerr to make his imprint right away if hired. Don't be surprised if Steve Kerr is a somewhat-shocking favorite to spurn both the Knicks and Warriors in order to establish his legacy on his own terms -- in Los Angeles.

Get Lakers coaching rumors as soon as they hit the internet. Download our new Chat Sports iPhone app and follow our Lakers team page today.