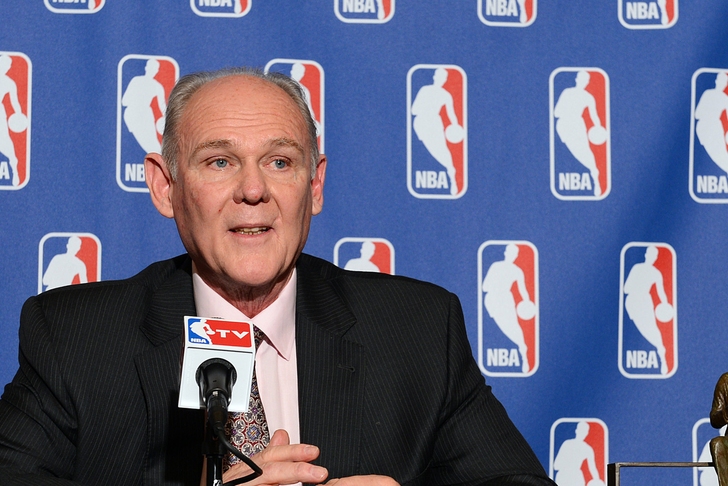 - The Chicago Bulls' Tom Thibodeau may be the man sitting at the top of Kobe Bryant's wish list, according to Adrian Wojnarowski of Yahoo! Sports: "Bryant will wish for Tom Thibodeau to free himself from Chicago." This scenario is highly unlikely, but still worth noting.

- Wojnarowski also names another wild card who could both provide a major spark and a blast from the Lakers' recent championship past: "Bryant has long admired Byron Scott, but there’s a different ex-Lakers guard who could go much further to regenerate the franchise’s culture and hold the insight into getting the most out of Bryant’s final two seasons: Derek Fisher."

- Mike Bresnahan of the Los Angeles Times has acquired a list of upcoming interviews which the Lakers have already placed on the docket. There are some expected names -- and perhaps some surprises as well --

The Lakers value Kurt Rambis as an assistant coach (and his 24-13 regular season record as interim coach for the team in 1999), but Rambis may not be the earth-shattering hire that Jim Buss is looking for at this present time. Rambis' 32-132 record as head coach of the Timberwolves from 2009-11 is less indicative of a lack of coaching ability than it is of how truly disorganized and bad those Wolves teams really were. Yet, Rambis' assertion last offseason that the Lakers should give up on being a running team due to their age may not garner him many style points in this search.

The Los Angeles Lakers are said to be "intrigued" by both Calipari and Connecticut Huskies' head coach Kevin Ollie, but it seems to be a relative long shot that the Lakers will be able to wrestle Calipari away from a spot at Kentucky which has been a huge shot in the arm for Calipari's coaching legacy. Calipari was the head coach of the then-New Jersey Nets from 1996-99, compiling a 72-112 record before being fired after a 3-17 start to the 1998-99 NBA season.

Byron Scott is rightfully admired and beloved by the Los Angeles Lakers' faithful for his part in the "Showtime" era of Lakers' lore. His coaching credentials are underrated, with two NBA Finals appearances (2001-02 and 2002-03 with the New Jersey Nets) and an NBA Coach of the Year award (2007-08 with the New Orleans Hornets) to his credit. If anyone knows what it takes to succeed under the microscope in Los Angeles, it's Scott.

Van Gundy's fire has made him as many enemies as he has friends in NBA circles, but that passion could be just what the Los Angeles Lakers and Jim Buss are looking for after what many fans felt was a sleepwalk with D'Antoni at the helm. The former outspoken New York Knicks and Houston Rockets head coach has been biding his time as a popular analyst for ESPN's NBA broadcasts, perhaps waiting for the job just like this one to start calling his name.

With a 1131-756 record and 25 years of experience as a head coach in the NBA, George Karl may top the shortlist of best coaches in NBA history to never win an NBA championship. George Karl has been rumored recently to be looking to follow in Phil Jackson's footsteps, perhaps angling for Cleveland Cavs' owner Dan Gilbert to create a president of basketball operations position just for him. Following in Jackson's footsteps as the newest Los Angeles Lakers head coach may be the more attractive, and probable, choice.

Adrian Wojnarowski of Yahoo! Sports believes the Lakers could find the key to "regenerate the franchise's culture" along with gaining "insight into getting the most out of Bryant's final two seasons" by keeping Derek Fisher on their minds as a potential blockbuster hire once the OKC Thunder are finished playing in the 2014 NBA playoffs. Wojnarowski believes Fisher "nearing the end" of his great playing career and should be "willing to listen" to the Lakers' overtures. Could we be looking at Mark Jackson 2.0?