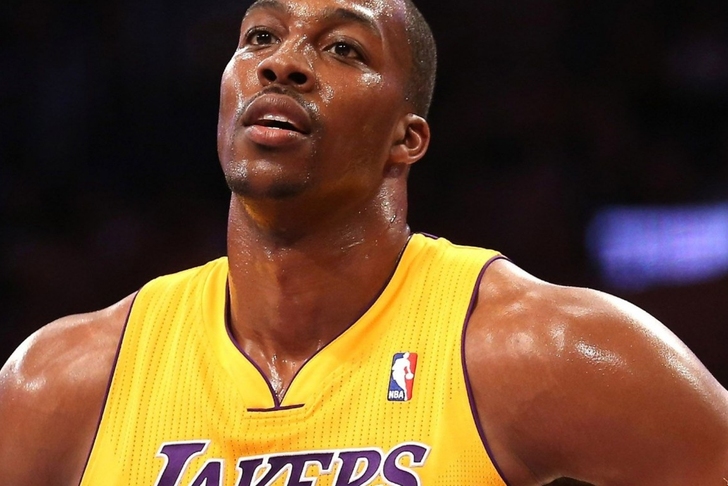 Last night, CSN Bay Area's Ric Bucher reported that Dwight Howard made some incredibly audacious demands to Lakers' management during his free-agent negotiations in June. According to Bucher, Howard told Jim Buss and Mitch Kupchak that he wanted Bryant "amnestied or muzzled", and D'Antoni let go.

The Lakers management clearly had no interest in this arrangement. It's unclear whether Howard actually thought there was a chance of the Lakers agreeing to his requests, although it seems unlikely - it's nearly impossible to imagine Lakers management amnestying the face of the franchise to sate the demands of a player who had only been there for one (largely unimpressive) season.

The full text of Bucher's report (posted on Sulia last night) is below:

"Talks with various people close to the situation make it clear there were two prerequisites for Dwight Howard to remain a Laker: fire Mike D'Antoni and amnesty, or at the very least muzzle, Kobe Bryant. As audacious as that might sound, it doesn't come without precedent in Lakers' history. When Kobe re-upped in 2004, it coincided with Shaq being shipped to Miami and Phil Jackson being let go. Of course, Kobe didn't have to pressure the team braintrust -- Mitch Kupchak and Jerry and Jim Buss -- to make those moves, since Dr. Buss, in particular, was done with both Shaq and Phil at the time.

The Lakers apparently asked Dwight to be patient on both fronts for at least another season, telling him "hey, you're going to have to gut this out another year," a source said, although it sounds as if VP of basketball ops Jim Buss isn't ready to abandon Kobe anytime soon. "Dwight didn't want to play with Kobe for 2-3 more years," Buss said. "I'm going to stand behind Kobe because of his history with the franchise." It would seem, then, with all that happened, the Lakers had the wherewithal to keep Howard if they had desired; they simply found the price too high."

This completely refutes the perception that Kobe and Dwight had an "amicable" relationship. While Howard was still a Laker, he and Kobe went out of their way to defuse reports of a rift, but now that Howard is a Houston Rocket, there's no reason for either of them to play nice. If Bucher's report is true, it'll be fascinating to see how this plays out over the next season.