LA Lakers Rumors: 7 Coaches Who Could Take Over For Mike D'Antoni 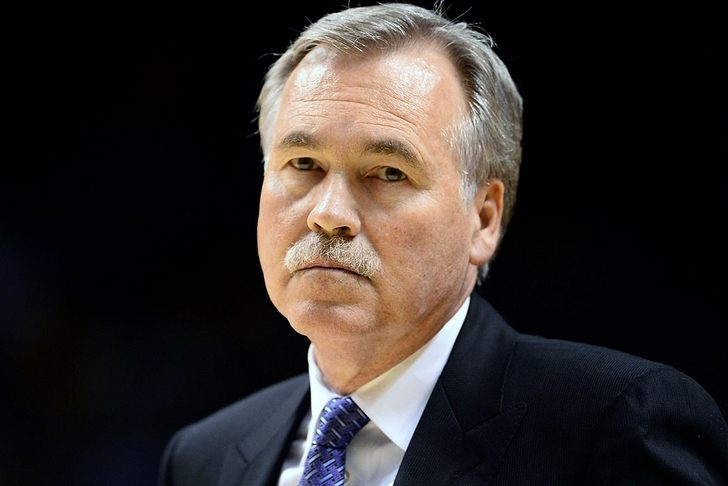 For all the latest in LA Lakers rumors, download our new Chat Sports iPhone app and follow our Lakers team page today.

The post-Mike D'Antoni era has officially begun in Los Angeles, with a bevy of expected and unexpected names being thrown around as potential candidates for the most sought-after head coaching job in the NBA -- and perhaps in all of American professional sports.

We here at Chat Sports are here to help sift through all the names being thrown around in the media - here are the 7 Coaches Who Could (Logically) Take Over For Mike D'Antoni:

If anyone is going to truly appreciate the opportunity to take over as the newest head coach of the Los Angeles Lakers, it's Kurt Rambis. The former Lakers' on-court cult hero  served as interim head coach for the Lakers during the lockout-shortened 1999 NBA season, registering a 24-13 record in the regular season before being swept out of the Western Conference Semifinals by the San Antonio Spurs. He has also served as the Lakers' assistant general manager (2000) and as an assistant coach under legendary head coach Phil Jackson (2001-2004).

Rambis' head coaching tenure from 2009-11 with the Minnesota Timberwolves was doomed from the beginning, as a lack of talent and front office direction led to an abysmal stay in the North Star State. A 32-132 record led to Rambis' firing in the summer of 2011, after which he was rumored to be amongst the finalists for the Lakers' coaching job in the summer of 2012...the job eventually won by one Mike D'Antoni. Despite working for D'Antoni as an assistant in 2013-14, Rambis could bring a more controlled and talent-specific system as head coach than the set-in-his-ways D'Antoni.

Ramona Shelburne of ESPN.com reports that the Los Angeles Lakers are looking to "make a splash" with their replacement for Mike D'Antoni. Ladies and gentlemen -- meet your splash. A former journeyman as an NBA player, Kevin Ollie has built up an extraordinary legacy for himself already at UConn after replacing legendary Huskies head man Jim Calhoun in 2012. 20 wins in 2012, a Final Four appearance in 2013, and a national title this season has vaulted Ollie from heir apparent status to one of the most sought-after young coaches in the game.

The question here is not whether the Lakers are willing to pursue Ollie -- it's whether the former UConn player and newly-minted champion is willing to risk all of the goodwill he built at Connecticut over the past three years for a chance at coaching immortality with the Lakers. That's a tough call for a 41-year-old rising star with a national championship in his back pocket and (presumably) a whole coaching career ahead of him.

Sometimes we forget that basketball is entertainment. Jeff Van Gundy, as both an analyst and a head coach for the Knicks and the Rockets, can bring a passion to the Los Angeles Lakers' bench that has been sorely lacking since the glory days of Phil Jackson. Jeff Van Gundy has expressed on multiple occasions that he is interested in returning to coaching after being fired by the Rockets in 2007 -- biding his time as a popular ESPN NBA analyst while being rumored to be a candidate for several vacancies over the past six years.

Is this the job Van Gundy has been waiting for all along? Will the Lakers look past some of the more colorful aspects of Van Gundy's career - including spats with NBA officials both as a coach and analyst - and see the unique strategic mindset which made some of Van Gundy's best Knicks/Rockets teams so dang fun to watch? We'll keep you posted.

If you were to poll Twitter 24 hours after the end of the Mike D'Antoni experiment in Los Angeles, the people's pick to take his place on the Lakers' bench would be none other than George Karl. Widely regarded as one of the best NBA head coaches to never win an NBA championship, Karl is sixth all-time in NBA history with 1,131 regular season victories to his credit. To put that in perspective, Karl trails only Don Nelson (1,335), Lenny Wilkens (1,332), Jerry Sloan (1,221), Pat Riley (1,210), and Phil Jackson (1,155) on that legend-studded list.

George Karl has been recently linked to a potentially new position in the Cleveland Cavs' front office, if owner Dan Gilbert decides to create a president of basketball operations position specifically for Karl himself. However, the allure of cementing a 25-year coaching legacy with a chance to lead the Los Angeles Lakers back to the glory days of years past has Karl on the shortlist of contenders for the job -- and number one with a bullet in a lot of fans' hearts.

When former NBA player and current analyst Rex Chapman declared that Calipari-to-the-Lakers was "a done deal" back in early April, it set off a spin-machine of denial from both Coach Cal himself and the Los Angeles Lakers' front office. Mike D'Antoni's resignation has reignited the rumors that the former New Jersey Nets head coach will make a return to the NBA in order to cement his coaching legacy.

However, if this tweet from Calipari's personal account is to be believed, the Lakers' interest could be more one-sided than previously assumed:

Before it starts, I'm totally committed to helping this group of young men reach their dreams. I wouldn't & couldn't leave this group!

Another fan favorite as both a celebrated member of the Showtime-era Lakers squads and as a potential candidate for the now-vacant LA Lakers' head coaching job. Many Lakers fans hold the sentiment that it should have been Byron Scott, and not Mike D'Antoni, who replaced Mike Brown as head coach in November of 2012. Will this be the time that the former Nets, Hornets, and Cavs head coach finally gets to take the helm of the team which built his star up in the 1980s?

There are two methods of thinking Jim Buss could take when it comes to a potential Scott hire in Lakerland. The first method would be to take a look at Scott's underrated coaching resume' with two NBA Finals appearances (with the Nets in 2001-02 and 02-03) and a NBA Coach of the Year award (2007-08 with the New Orleans Hornets) and hire him on both credentials and his ties with the Lakers' organization.

The second would be that the Lakers need to make a move that grabs the national headlines in such a way that the Lakers are back to being the talk of the league come 2014-15. Scott may not fit that bill, but does he really need to?

If there's one thing the Van Gundy brothers are good for, it's quotability. As another member of the vocal Van Gundy clan, Stan's mouth got him in trouble a few times -- including the above incident which may or may not have gotten him fired from the Magic in 2012.

However, Stan wins basketball games -- never posting a sub-.500 record in parts of eight seasons as an NBA head coach. Stan is the ultimate inside-out coach, knowing how to utilize his bigs to open up shots around the perimeter. If Stan Van Gundy is hired as the next Los Angeles Lakers head coach, don't be surprised if Pau Gasol comes back with the notion that the Lakers' offense could begin to cycle through him once again.

The Lakers haven't announced an interview with the "other Van Gundy" yet, but don't be surprised if and when it occurs.

Kobe Bryant On Donald Sterling: "I Couldn't Play For Him"