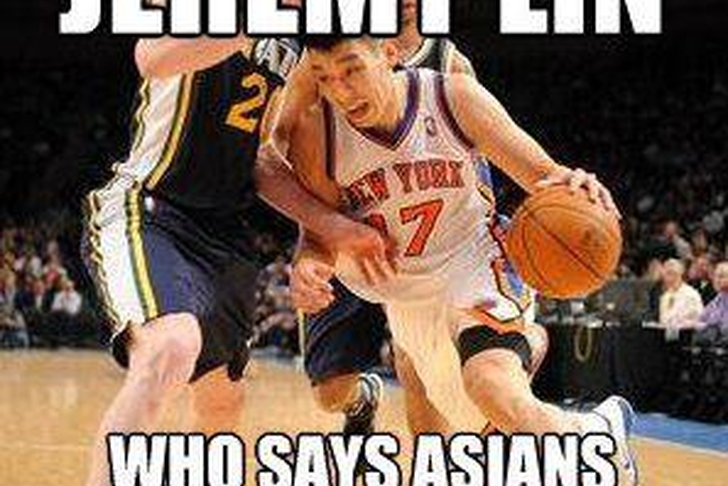 [/caption]The current biggest story in the NBA has nothing to do with rivalries, records, or (thankfully) LeBron. Nope, the blogosphere and social media outlets are buzzing about the NBA's latest "rags to riches" star: Jeremy Lin.

With Carmelo Anthony injured, Lin has burst onto the scene with three consecutive stellar games, averaging 25 points and 8 assists. Facebook and Twitter have been inundated with Lin updates as well as countless Jeremy Lin memes. Terms like "Linsanity" and "Linning" have been coined over the past week as well.

His quick rise to popularity can be traced to a few different factors. Being on the Knicks certainly helps, as does his "out of nowhere" breakout status. He was literally playing in the NBDL a month ago. He's also a a guard of Asian descent from an Ivy League school, which if you're scoring at home: (Smaller than Yao Ming Asian guy + Ivy League) does not = NBA Player. Defying the odds, which in Lin's case is just about every one of them, is always a great story.

Growing up in LA, I went to high school with a good number of Asian, Filipino, and Pacific Islanders, and almost all of them wanted the Lakers to draft Lin with a throw-away second round pick a few years back. And now, nearly every one of them has posted something to Facebook or Twitter about Jeremy Lin over the last week. It's only natural that people want to watch someone succeed whom they can identify with. And Lin isn't Yao Ming, or Yi Jianlian. He's from Nor Cal.

So leave it to the one man who's been bursting bubbles for 15 years now to puncture the Jeremy Lin hype. Kobe Bryant was asked about Lin after last night's game in Boston. Here's his response courtesy of WEEI's Ben Rohrbach:

It doesn't get much better than that from Kobe. Lin should actually feel encouraged by Kobe's reaction, because Kobe only reserves the "This is too far beneath me" routine for players or teams that he actually wants to crush. If he doesn't care, then he just leaves it with a comment like: "Yeah I've seen it, he's doing OK, but we'll have to stop him tomorrow." That's it. But he knows exactly who Lin is and what he's been up to, but won't give him an ounce of credit until he does it against the Lakers. Kobe will be determined not to let that happen though, so he can leave New York saying "I don't know what the big deal is" while simultaneously receiving credit for stopping a phenomenon.

As if you needed more reason to watch a Lakers vs. Knicks game, tune in to ESPN tonight at 5:00PM PST to see if Jeremy Lin is the real deal, or if Kobe and the Lakers can put an end to the "Linsanity".