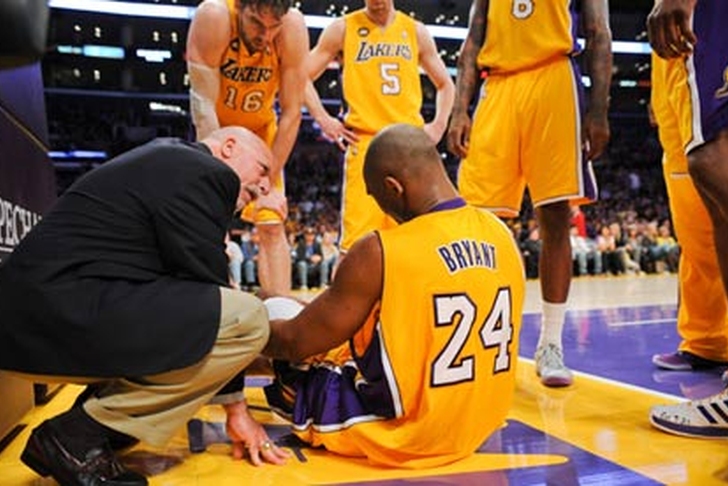 In a recent one-on-one interview with Hall of Fame point guard Gary Payton, Kobe Bryant, who is on the eve of his return from a season-ending Achilles injury, opened up on some topics that have been itching at Laker fans all-season long. From the Lakers-Clippers battle for Los Angeles to his expectations for the Lakers moving forward, the 35-year old Bryant seemed both cool and confident.

He went as far as saying he will finish ahead of Michael Jordan with more than six championships and said he is still the best player in the league. Coming from Bryant, this wasn't surprising.

Building up to what will surely be an intriguing comeback, the aging Bryant has not only hyped his return, but he has also continually entertained the idea that the Lakers will be relevant once he hits the floor. And for the most part, this has been accepted to an extent.

But amid this Hollywood-esque story line has lied the elephant in the room that says otherwise. The one that points to the Lakers tanking worse with Bryant than without him. This is the most likely reality for the Lakers once Bryant returns.

When Bryant is penciled into the line-up for the first time this season (whenever that is), it will be alongside an aging Steve Nash, Pau Gasol, Xavier Henry and Nick Young barring any recent injuries. For the Lakers, this isn't good news.

While players like Henry (9.2 PPG), Young (14.2 PPG) and Farmar (9.2 PPG) have played formidably in the absence of Bryant, there is a strong possibility that the chemistry and flow of the team will be lost upon the arrival of Bryant. For a Laker team that has survived on team hardwork and unselfishness, there is now a sense of uncertainty that could taint the season in a far worse way than what numbers may represent.

For Bryant, this will be an opportunity to set aside his ego and show a level of maturity that will be needed for the Lakers long term. Anyone that is looking at this roster objectively will tell you the playoffs is a stretch and under that context, Bryant has to understand the values of maintaining team chemistry while looking forward to what will be a huge offseason for the Lakers.

Bryant may not be the type that will forgo his killer instinct and that's ok. But that won't excuse the possibility that his return will hurt the Lakers rather than turn their season around. Laker fans may be looking forward to the Black Mamba's return, but it may not be for the right reasons.