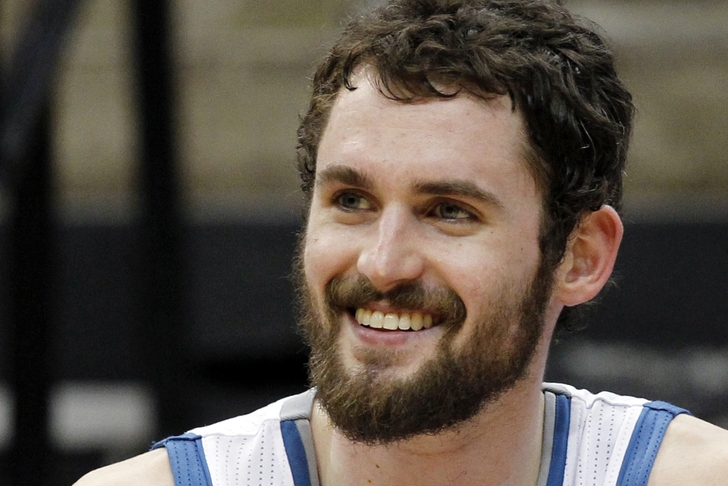 Kevin Love trade rumors look to dominate this offseason with reports surfacing that Love has given the Minnesota Timberwolves a blunt ultimatum -- trade him or lose him to free agency. The Los Angeles Lakers are prime contenders for Love's services, so let's take a look at what a Love trade would mean to Lakerland.

It all very much depends on the Pau Gasol situation. Gasol has been pretty much written off as leaving via free agency this offseason, but Mike D'Antoni's departure could spark a change of heart. It is possible to slot Gasol over at center and have Love dominate at power forward -- a twin towers offense which would provide crazy spacing for Kobe Bryant and the team's young guard corps to get off shots at will.

Without Gasol, the Lakers may need to take a serious look at retaining Jordan Hill (or perhaps Chris Kaman) -- or see what they can do via the draft (depending on what they give up to get Love) and/or free agency. However, Love's dominance on the boards would more than make up for a potentially weakened center position -- meaning the Lakers would trade for Love in a heartbeat right now if they could.

It depends upon if the Lakers are ready and willing to give up a potential top-five draft pick to get him. This is one of the most loaded NBA Drafts (especially at the top) in recent memory, meaning that the Lakers could very well be passing up a franchise player to acquire another on a potential one-year loan.

It could be the Lakers best interest to gauge the trade market for Love, see if Love would be willing to commit to a sign-and-trade (giving up his 2015 free agency leverage), and go from there.

Likelihood: Medium leaning towards not this year