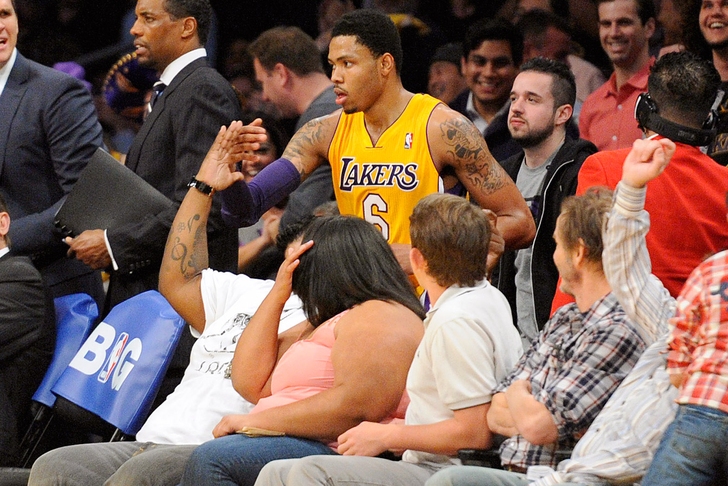 Last night's rivalry game between the Celtics (19-37) and Lakers (19-36) wasn't about fighting for a playoff seed or anything of that matter. Both teams are more or less out of playoff contention with roughly 30 games remaining, but that was beside the point. This game was simply about providing a glimpse into their future directions and for the Lakers, it looked pretty promising as of last night.

Shortly after the Lakers sent Steve Blake to Golden State in exchange for guards Kent Bazemore and MarShon Brooks, a spark appeared that hadn't been present before. Though this game will serve—for now—as one game out of what will expectedly be a large sample size of games to come, Bazemore and Brooks poured some much needed hope back into a discouraged Laker fan base. Not because they are going to make a dramatic late season impact, but because they showed a glimpse of what could be a formidable Laker bench in the near future.

The biggest positive in regards to the acquisitions of Bazemore and Brooks was the timing. With 30 games remaining and not much to play for, the Lakers will have the opportunity to groom both players under a very open Mike D'Antoni rotation. With Bazemore and Brooks both averaging less than 10 minutes and five points this season, it wasn't a surprise to see them take advantage of more playing time last night. Heading into a key offseason, the Lakers can at least rest a little easier at night knowing they have two formidable role players moving forward.

With the trade rumors of Kevin Love potentially leaving Minnesota in 2015, the Lakers have been eyeing what could be their one way ticket back to the top. Love has been adamant about staying neutral on the situation—as he should be—but when it's all said and done it would be a huge shock for the best power forward (arguably) in the NBA to further invest with a  small market team in the Timberwolves.

Assuming Love dons the purple and gold at some point in the next two years, the Lakers now have the tools to regain their relevancy over the next two years. This would of course be in addition to the first round pick the Lakers will presumably have in the upcoming 2014 NBA draft.

With a rare offseason waiting for Kobe Bryant to heal and rest up, an up-and-coming duo in Nick Young and Xavier Henry eager to push their ceilings, and an unexpected pick up in Kendall Marshall, the Lakers are surprisingly in good position to make another quick turnaround as a franchise. It is understandable that the future direction under Jim Buss is still grey at best, but simply going by statistics and common sense alone, he may not be able to disrupt this potential even if he wanted to. This season, the Lakers rank second in bench scoring behind San Antonio with a 41.2 points per game average.