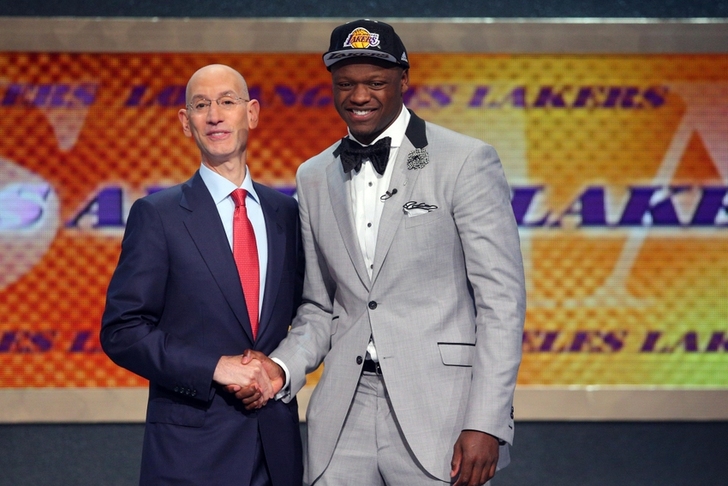 With the seventh pick in the 2014 NBA Draft, the Lakers drafted Kentucky big man Julius Randle, their highest selection in 32 years. The possible second coming of Zach Randolph (with hops) and Dominique Wilkins lookalike is now the Lakers investment for the future and under that context, it looks bright.

For the Lakers, Randle was a steal. Randle undoubtedly has the tool set to become a long-term starter in this league and if it weren't for Andrew Wiggins, Jabari Parker, Joel Embiid and a recently reported foot injury, Randle could have easily gone earlier in other drafts.

He made sure to make that apparent in his post-draft interview.

In regards to how Randle will fit in with the current Laker roster, there is also the potential for short and long-term success.

Immediately after Randle got drafted, Kobe Bryant tweeted out his congratulations and though it's always hard to read between the lines with him, the respect level between the two seemed to be genuine.

This within itself is a good first step.

Growing up, Randle was a self-proclaimed Laker fan and Bryant admirer. Despite being born in Dallas, Texas, Randle openly confessed his admiration for the purple and gold during his pre-draft workouts.

Even when Adam Silver called his name for the Lakers, Kentucky head coach John Calipari turned to the recently drafted Randle and said, "this is where you wanted to be."

In many respects, Randle was meant to be a Laker.

The biggest worry for Laker prospects in the past have lied with Bryant's distrust in them. Bryant forces younger players to gain his respect and most cases, this has been to a fault.

Had the Celtics not taken Marcus Smart, who is a confident personality to say the least, he may have written a completely different story with the Lakers.

For Randle however, this may just work out to his advantage.

Already off to a good foot with Bryant and the Lakers, who have been raving about the big man since his workouts, it will be Randle's game to lose. The foundation has been laid and it's now up to Randle to shine under the big lights.

Another perk of Randle coming to the Lakers is the added interest of big name free agents to sign with the team. Names like Carmelo Anthony (Knicks), LeBron James (Heat) and Kevin Love (Wolves) have been floating around and the addition of Randle just may suede them to join what is currently a bottom feeder in the west at best.

For a team that is continually looking for ways to get back to the top, Randle may have been the turning point.

Randle will be starting for the Lakers this Fall barring injuries. The 6-foot-9 power forward is planning to be an integral part of the team next season and for now, the feeling couldn't be any more mutual.

Possible starting lineup for the Lakers in 2014-2015 season

SF - Nick Young (if he signs a new contract)

C - Pau Gasol (if he signs a new contract)

With Randle, the Lakers just may have landed the jackpot. In moments like this, the Lakers have been able to sustain longevity as contenders and it's looking up for a franchise that has been in the dumps for the past few years.

Randle may not become a perennial all-star or necessarily even a 20-10 guy for that matter, but he is as close to an answer to all the criticism that the Lakers have been looking for. For a player that hasn't stepped onto an NBA hard court, he is off to a good start.