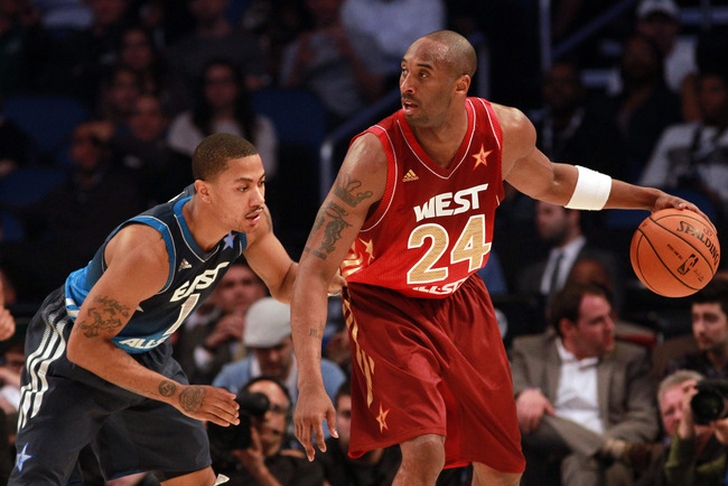 The Lakers limped into the All-Star break with a 20-14 record, 1 game back of the Clippers in the Pacific Division and currently sit in 4th place in a fluid Western Conference playoff picture. It looks as if the Lakers (barring a complete collapse) can finish anywhere from 3rd-6th in the Western Conference, but their championship potential seems a bit out of reach.

It's something that every fan, player, coach, and even GM can see. The Lakers are a step behind the championship caliber teams, but that's not to say that a couple of small, or even one big, move could change things. Lakers GM Mitch Kupchak is keeping all of his options open, even though Kobe Bryant would love to see Pau Gasol stay a Laker. Rumors swirled over All-Star weekend that the Lakers and Magic were discussing a Dwight Howard, Jameer Nelson, and Hedo Turkoglu for Andrew Bynum and Pau Gasol trade, but both teams quickly denied it. Reports later surfaced that Dwight Howard's agent told Lakers radio play-by-play announcer and local reporter John Ireland that D12 would not sign a contract extension if the Lakers traded for him this year. This was confirmed by Ireland on the Colin Cowherd show, who said that the Lakers would essentially be getting Howard for six weeks and gambling that they could convince him to stay.

After the break, Kupchak and the Lakers then rejected a deal with the Minnesota Timberwolves that would've landed them Michael Beasley in exchange for a first round draft pick. Many fans were upset by this trade decline, but the Lakers did the right thing by holding onto their draft pick (which could be their highest pick in years) and not adding a one dimensional player with ethic and chemistry issues who can't even start for the Timberwolves, and who would've pushed the Lakers even further over the luxury tax.

And lastly, the Lakers have been entertaining the idea of adding former nemesis, and current retiree, Rasheed Wallace to this circus of a roster.

While none of these moves may actually come to fruition for the Lakers, it's clear that Mitch Kupchak and the Lakers front office will do SOMETHING before the March 15th trade deadline. Here's a list of five realistic roster moves that need to happen to give this Lakers team a shot at another title:

- Trade Metta World Peace for less than what they traded Lamar Odom for.

It might be difficult, but it needs to happen. MWP is having a train wreck of a season, even though Mike Brown has severely limited his playing time. The problem isn't exactly this season, but the next two, as the Lakers will owe Peace nearly $15 million after he picks up his two year player option at the end of the season. And at the rate he has been declining, that money will be sitting on the end of the bench uselessly for the next two seasons. Just get SOMETHING for him. Anything really. A second round pick. A quarter of his contract. Just clear the roster spot, pay part of his deal off, and be done with it. I can't watch him brick another three pointer, or get beat defensively, or commit a ridiculous foul any longer.

Teams that might be interested in a nearly free Metta World Peace: Philadelphia (needs some bench help), Minnesota (David Kahn LOVES bad contracts), Charlotte (they just need actual NBA players on the roster), and the Wizards (he would get along great with JaVale McGee, right?).

- Send Derek Fisher to the bench.

Not quite a trade, but still a much needed roster move. Although Mike Brown has limited Fisher's minutes recently in favor of Steve Blake, it's not quite enough. Fisher still starts the game, and plays pretty much the entire 1st quarter of each game. While it might be a harsh pill for Derek to swallow (and it would need some serious cojones from Brown to do it), he needs to start the game on the bench. Remember when Fisher played for Utah? He came in off of the bench and sparked the team in limited minutes against back up point guards. Why keep this charade up just so that he can be a "starter"? Fisher's a consummate professional, and should understand that his years as a starter are over and he can best be utilized in a backup role. This needs to happen ASAP.

If you haven't noticed, the Lakers PF position is played by Pau Gasol and Troy Murphy almost exclusively. Mike Brown has either Bynum or Pau on the floor at any given time, and often has them both out there. That means that Pau vacillates between PF and C throughout the game, with only Murphy coming in to spell either of them. That means no back up center except for Pau, and only one legitimate big man coming in off of the bench. This isn't going to get the job done in the playoffs. The Lakers need another big man on their bench immediately. While pickings are slim (please God don't let it be Rasheed!), options are out there.

Here's a few current free agents that the Lakers could sign: Leon Powe, Malik Allen, and Etan Thomas. Or they could easily trade a second round pick for guys like Amir Johnson, Markieff Morris, or Dante Cunningham.

The NBA has already seen overseas players such as JR Smith and Kenyon Martin get signed by teams in the middle of the season (the Knicks and Clippers respectively). The last players stuck in China are Wilson Chandler and Aaron Brooks. Chandler is currently leveraging his prospects with teams around the world against the Nuggets, and based on his ability that situation could get messy quickly.

Aaron Brooks on the other hand is a little bit easier of a situation. His season in China ends very soon, and although he is a restricted free agent of the Phoenix Suns, it's unclear if the Suns can and would keep him. The Suns' options are limited. They could sign him for the remainder of the season, making him an unrestricted free agent at the end of the season (not worth it at this point for them), sign him to a long term deal (unsure if he would sign one), or wait until the season is over and give him a qualifying offer then (too little too late).

If the Lakers overpay just a little and offer a multi-year deal at something like $3 million a year, the Suns would definitely not be willing to match it. Aaron Brooks is exactly the type of point guard that the Lakers need. He can distribute effectively, score in bunches, and guard the quicker PGs in the league. He would give the Lakers an instant boost in terms of speed, and could be the missing link (lack of easy scoring) for this team this season.

- Just for fun: Potential blockbuster that could work.

For all of you hell bent on trading oft-criticized and somewhat aging big man Pau Gasol, I have a trade that just might work. Forget about the Pau for Rondo deal (which will never happen), and take a look at this:

The Lakers would send Pau Gasol to the Rockets and Luke Walton and Darius Morris to the Raptors for Jose Calderon, Luis Scola, and Leandro Barbosa in return. The Lakers would also need to use Lamar Odoms trade exception here to make all of the money work.

In addition, the Raptors would get Hasheem Thabeet and Goran Dragic from the Rockets in the deal.

While this deal is taking a huge leap of faith from the Raptors wanting to get some cap space while acquiring some young players (and Walton's almost expiring deal), it also sets the Lakers up very nicely not only for the end of the year, but also for the future. Barbosa is a great scorer off of the bench, and would give the Lakers great depth for the rest of this season, while also having an expiring deal. The Lakers would also get a legitimate scoring PG in Calderon, and 3 additional years at a great price for Scola, who is a true PF. Teaming Scola with Bynum would work nearly as effectively as Pau and Bynum, with the Lakers only losing a little bit of size.

Here's a link to the trade: http://games.espn.go.com/nba/tradeMachine?tradeId=7qs5q33

Come up with your own trades and post the link in the comments section below!