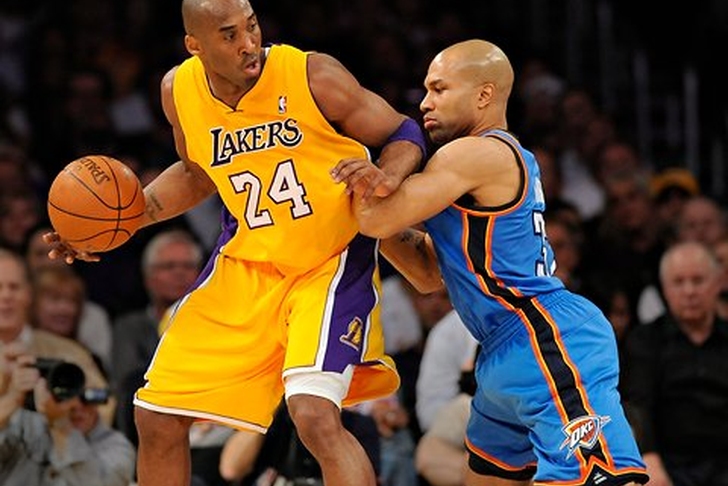 With 15 games left in the NBA regular season, the Lakers are anything but reliable. The trade for Ramon Sessions upgraded the point guard position while making the team a bit younger, but the Lakers have continued to play "Dr. Jekyll and Mr. Hyde" from game to game, despite his successful performances. The Lakers have gone 3-4 over their last 7 games, with discouraging losses to the Jazz, Rockets, Grizzlies, and Thunder. The Lakers were outscored in the 4th quarter in each of those games, and gave away first half leads in a few of them. Even their win against Golden State on Tuesday night almost turned into a disaster, as the Warriors outscored the Lakers in the 4th quarter before ultimately falling short.

As we look toward the closing of the 2011-2012 regular season, here are 5 thoughts about the end of the Lakers season:

- The schedule is very favorable.

Looking at the next 15 games, 8 of them are at home, and 1 of the road games is also at the Staples Center against the Clippers. The Lakers have posted a remarkable 20-5 home record, but have a disgraceful 11-15 record on the road. The road games to end the season include games at the Clippers, Hornets, Suns, Warriors, and Kings, all winnable road games for the Lakers. If they can handle to lesser teams on the road, they should be able to post an 11-4/12-3 record over their last 15 games. That being said...

- Their up and down play is VERY disconcerting.

It's sometimes common for an NBA team to go on swings of good or bad play, sometimes for 2-3 games at a time or longer. Teams can get into a funk on a road trip, play poorly, lost 4 out of 6, and then look like world beaters once they get back home. Conversely, bad teams can get hot and play well for a short spell before returning to mediocre play. The Lakers on the other hand, go on huge swings IN BETWEEN GAMES. They can't seem to string together 3-4 good quarters, let alone a string of games. Early 1st quarter/half leads have been disappearing quickly in the second half, when the Lakers have to regroup to win a game that could've already been put away. I don't have to tell you that this won't fly in the playoffs, as the Lakers will make a quick exit if they get used to giving up leads.

- Mike Brown is not endearing himself to anyone.

Benchings, poor substitution patterns, fake twitter handles, Kobe rumors, Bynum rumors, alleged chemistry issues. All in a week's time for the Mike Brown era Lakers. To be fair, some of the issues are warranted, while others are baseless media creations for the NBA's most popular team. As for the benchings (Mike Brown benched Kobe for a good portion of the 4th quarter of one game, and then benched Andrew Bynum for a spell because he took a 3-pointer), I agree with one and not the other. In the case of Bynum, a benching like that is completely warranted. You don't want your center starting to shoot threes. Bynum already doesn't get enough touches down low, so I can understand him wanting to shoot it when he gets the ball (wherever he is), but him shooting that shot is a complete waste.

The Kobe "benching" is a different story though. Mike Brown claimed that it was not a direct benching, but just that he liked what he saw on the floor and kept the rotation that he had out there. The problem of course, was that the Lakers were LOSING the game to the Grizzlies, and maybe could've used their best player on the court. Some also posited that Kobe was getting some additional rest because he had racked up some extra minutes of the last few weeks. If you want to rest Kobe, I'm all for that, but have some sort of system to the rest, and not just do it at random times. Or else you look like an idiot, which was my first reaction to his leaving Kobe on the bench. Claiming it was rest or admitting that it was a legitimate benching sounds a lot better than letting the world know that you just plain forgot to get your best player into the game during a pivotal moment of the game.

And that's kind of "it" for me with Mike Brown. His substitution patterns irritate me (weeks of Troy Murphy only, now it's Josh McRoberts only, Sessions' playing time, and using Pau and Bynum effectively), his play calling is frustrating (going away from what's been working the previous 3 quarters, leaving Bynum out of the game for large spells of the 4th quarter), and his coaching style has led to "chemistry concerns" at every turn. Not that Phil Jackson didn't have some of these issues in his early days as Lakers head coach, but if Mike Brown doesn't get people on his side, it could be a quick exit for him.

- The Lakers are still in good shape for the playoffs.

Looking at the standings, it looks as if the Lakers will be able to hold off the Clippers, Mavericks, and Grizzlies for the #3 spot, and play either the Rockets, Nuggets, or Jazz in the first round. The Clippers and Mavericks are both playing poorly down the stretch, and out of the group of teams only the Grizzlies and Rockets pose a threat in a playoff series. After that it would most likely be the Spurs (a very favorable matchup for the Lakers) and then the Thunder in the Western Conference Finals. Despite last night's result, if the Lakers slow the game down against the Thunder and pound the ball inside with their two 7 footers, they can definitely win a series against the Thunder. It could definitely be a lot worse, but I like the Lakers chances in a lot of those playoff series.

- Can everyone stop using the term "Hero Ball"?

I'm done with this term. First of all, it's usually only directed at Kobe Bryant, even though nearly every team has a go-to player on their team that they rely on in pressure situations. Secondly, it gives "Hero" a negative connotation, which should really never be the case. And lastly, the assertion that a team's best player is not the best option to shoot the ball at the end of a game, is just plain wrong. Henry Abbott might assert that "Hero Ball" and isolation plays are actually detrimental to the team, citing Michael Jordan and Kobe Bryant as his prime targets. But since when do people associate MJ and Kobe with losing?