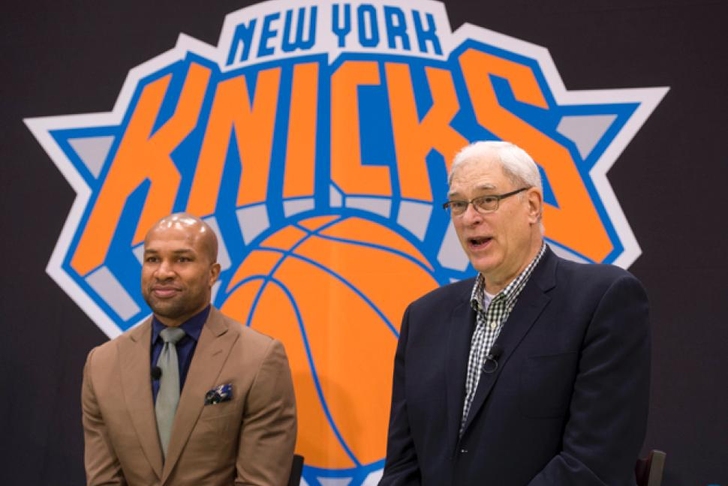 The recent hire of former Laker and recent Thunder guard Derek Fisher for the Knicks head coaching job wasn't surprising. The 39-year-old veteran was a hot target for both the Lakers and Knicks job, due to his previous ties with both organizations.

Despite having no coaching experience, Fisher made the case for his qualifications at the podium when introduced. Having been a five-time NBA champion, a player representative for the National Basketball Players Association (NBPA) and a long-time starting point guard, Fisher believed his accumulation of experience has prepared him for what lies ahead.

"Basketball is a game that I am experienced in playing, understanding, leading in, guiding in, helping another group of people achieve the greatest gift in the world being a professional athlete and that's being a champion," Fisher said when first introduced as the Knicks head coach.

Following the hire, there was a natural reaction that flooded the media, and it involved the Lakers. As the loser of the Fisher sweepstakes, there was an understandable notion that Fisher didn't want to take over an unstable Laker team, let alone try and coach his former teammate Kobe Bryant.

In retrospect, he probably made the right choice.

Allegiance to your previous team can only go so far. For Fisher, this decision couldn't have been easy. Not being able to retire in a city you called home for 13 years is already a hard pill to swallow and this thought alone would have been the only understandable reason to return to Los Angeles.

At the end of the day, Fisher made an objective move, rather than an emotional one.

The storyline behind this hire will be one that will be written as Jackson attempts to restructure the Knicks into contending form. However, the storyline for now, revolves around the fact that the Lakers couldn't manage to draw one of their most beloved players.

Every Laker fan cherishes the .4 buzzer beater to defeat the Spurs in Game 5 of the 2004 Western Conference Semifinals and is forever grateful for Fisher's leadership on and off the court during his five NBA title runs. Fisher may have worked out in Los Angeles as a coach in theory, but it was a lot more complicated than simply reuniting with his old team.

Fisher made the right choice because of two reasons: Bryant and the Jim Buss. The Lakers have never been this unstable as a franchise and with an aging Bryant (35) that is openly impatient about winning a title, Fisher would have been walking into a risk at best.

Who can blame Fisher for avoiding what could end up being the worst period in Laker history?

The reality is that the Lakers aren't even sure about what direction they are headed in the coming years. Los Angeles has never appeared so unattractive and it's resulted in both Jackson and Fisher opting for other organizations. Maybe Los Angeles isn't same franchise it used to be and maybe, it's about time for Bryant to walk away with some dignity.

One thing is for sure though and it's the fact that the Lakers are nowhere near returning to the top in their current state. The appeal of the franchise has always kept the Lakers afloat, but it may not be the case moving forward.

The Lakers will reportedly wait until the offseason to pursue their new head coach.