Colts success shows what could have been for Lakers 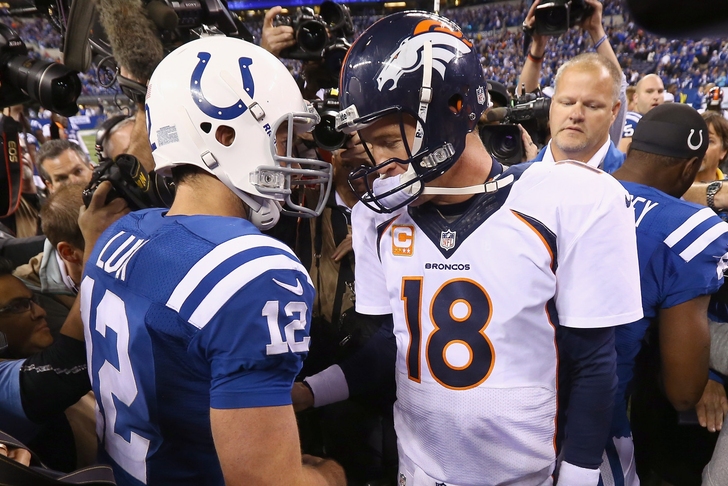 As the AFC South leading Indianapolis Colts walked away with a narrow 45-44 first round playoff victory over the Kansas City Chiefs, a simple thought surfaced: what if the Lakers had let go of Kobe Bryant? What if the Lakers had implemented a plan similar to the Colts letting go of future Hall of Famer Peyton Manning?

The mere reality is the Colts are experiencing the benefits of a calculated risk they decided to take when beginning a new era with Andrew Luck. The argument for Luck over Manning may still be in the works, but it has continued to gain strength amid a successful turnaround following the departure of their once franchise quarterback.

When you take a look at the current situation for the Lakers, there is an unspoken feeling that they made a mistake by prematurely resigning an injured Bryant for a two-year $48.5 million extension. Bryant has already suffered his second long term injury and the Lakers have continued to suffer the consequences of housing an aging superstar.

If the Colts could let go of arguably the best quarterback of all-time, why couldn't have the Lakers let go of an injured Bryant? The beauty of the Colts transition was of course, the fact that Manning gave his consent to the people upstairs as opposed to Bryant, who made up his mind early on to stay with the Lakers.

Now, the fundamental difference between the Colts and Lakers is the level of talent. The Colts are obviously superior in that department in comparison to the Lakers, but the intrigue lies more on the possibility of what the Lakers could have done with the absence of Bryant's pay roll rather than how far the Lakers could have gone in the playoffs this year. Even with the departure of Bryant, the Lakers would likely be in rebuilding mode, but the case for a bright long term future is something that can definitely be made; something the Lakers would gladly trade for under their current circumstances.

Without Manning, the Colts have reestablished themselves as a legitimate contender despite losing Reggie Wayne to a torn ACL and look to be on their way to a successful future with Luck. If the Lakers had let go of Bryant, this could have been the case for the Lakers sooner rather than later.

As the Manning led Broncos head into the playoffs with a No. 1 seed in the AFC West, there is an added dimension of what Bryant could have done had he signed with another franchise. Bryant may be over the hill and injury plagued, but there is no reason why he couldn't have helped another team become playoff contenders, similar to his NFL counter part.

The Lakers may be pushing all-in for the upcoming offseason, but they could have entered it with a better prepared roster situation. This will be the reality as long as Luck and the Colts continue their pursuit of forgetting Manning.