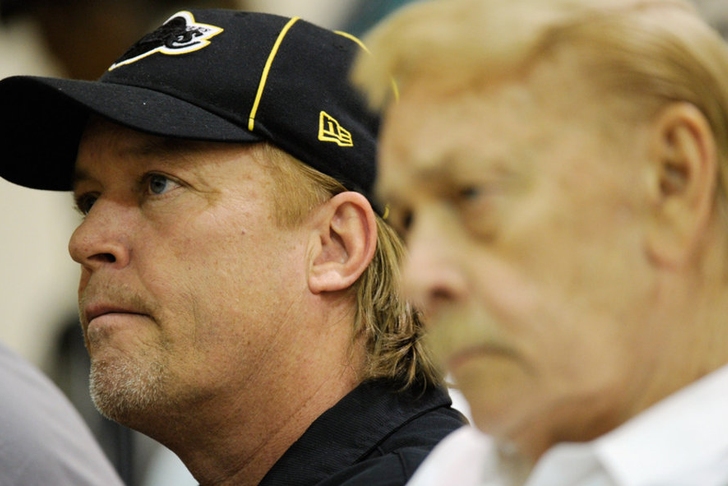 The primary job of being the executive vice president of player personnel is to look out for the team's best interests, not your own. But with the recent trade rumors surrounding Andrew Bynum, who was recently suspended indefinitely for "conduct detrimental to the team," that notion was thrown out the window once again by Jim Buss.

After taking over the team this past year following the passing of the great Dr. Jerry Buss, Jim Buss has time and time again exemplified a level of immaturity that can only be compared to the Dolan family. The Lakers are already in the rough with injuries and mediocre talent, and their so-called executive leader is doing all he can to pour the salt on his team's wounds.

Though the trade rumors surrounding Bynum and Gasol have quickly proven to be nothing more than the usual talks between two sub-par teams, the mere fact that they exist reflects the emotions of someone who initially pushed to draft Bynum out of high school. Jim hasn't been shy about his interest in/bias towards the once highly-touted prospect out of St. Joseph High School, and it continues to color any sense of objectivity toward a potential deal.

In the short span of time that Jim has been in charge, the Lakers have fired Mike Brown, hired Mike D'Antoni, let Dwight Howard walk, signed an aging Kobe Bryant to a two-year $48.5 million extension and played at a level nowhere near that of a contending playoff team. While this has a lot to do with rebuilding and transition after the passing of his father, the vast majority of the unnecessary mistakes made have without a doubt been a direct result of Jim and his refusal to take the sound professional advice given to him when the opportunities have been presented. Plain and simple, the Lakers have little-to-no direction under Jim Buss.

With a high level of uncertainty for the Lakers moving forward, the little amount of hope the franchise has lies in the upcoming offseason, where decisions will once again fall on the shoulders of Jim Buss. While Mitch Kupchak still carries the title of general manager, in all likelihood, the final decisions will be made under the eyes of Jim.

For a Lakers team arguably in its worst state, this is a mere reality check. We've seen that as long as Jim is in power, there will be no such thing as a guarantee, even for a team that still considers itself one of the best franchises in NBA history.