Andrew Bynum Fined By The Lakers, Draws The Media's Ire 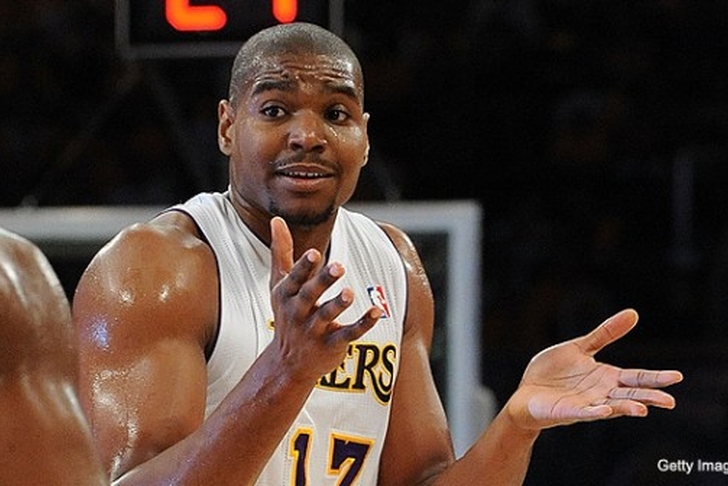 Andrew Bynum was fined an undisclosed amount last night by the Los Angeles Lakers for what they termed "multiple infractions". According to sources, the straw that broke the camel's back was a missed meeting with Lakers GM Mitch Kupchak earlier in the week. That combined with his benching last week and recent comments about Mike Brown's huddles has led to the media unleashing a flurry of negative stories and overly scrutinizing assessments of Bynum's behavior.

Kelly Dwyer from Yahoo! Sports' Ball Don't Lie blog eviscerated Bynum in an article on Monday, asserting that he's old enough, been in the league long enough, and too much of a star to be acting immaturely. Matt Moore from ProBasketballTalk.com wonders if the dunks are worth the headache for the Lakers. T.J. Simers (shocker! A negative article from Simers!) used Bynum's apparent insurgence as a vehicle to undercut head coach Mike Brown. Yahoo! Sports also came out with a video, where pundits discuss whether or not Andrew Bynum's "antics" are hurting the Lakers. Hell, even the music coming from Bynum's headphones in the locker room is getting analyzed.

So with Andrew Bynum under the constant negative media microscopes, one questions still remains: Is the criticism deserved?

Like a presidential candidate, I flip flop on the issue of Andrew Bynum. On the one hand, I absolutely CAN'T STAND people who do things like park in handicap spaces and think that they're not only better than everyone else, but more important than a physically disabled person. Unfortunately, he's not the first athlete or famous person do to the exact same thing. Last year I wrote that everyone overreacted to the JJ Barea hard foul as well as the way in which Bynum left the court, and I stand by what I thought at the time. Kevin McHale gets universal praise from everyone outside of LA for his hit on Kurt Rambis back in the day, but now Bynum's way-more-tame foul is a disgrace? No way. Barea's stature combined with balance in that exact moment make the play look infinitely more harsh than it really was.

As for the more recent issues surrounding Andrew Bynum, again I don't think that the harsh criticism is entirely deserved. While I clearly don't like my 7 foot tall center shooting 3 pointers, even during practice, I can chalk that up to a number of different things. He probably hit a few in practice and joked with teammates that he could make one in a game, or even made a bet, whatever that case may be. It was one 3 pointer, and he got properly benched for it.

As for his comments about getting his "zen" on instead of participating in team huddles, I have a lot of different reactions. Unfortunately, none of them involve me getting upset, discouraged, or even disappointed in Andrew Bynum's demeanor or attitude. First of all, Bynum was asked about Kobe's demeanor during timeout huddles, and remarked flippantly to the reporter's non-interesting question. How many athletes have we seen give weird or strange answers to questions that they really don't care about? Moreover, what former coach might have even answered the question in the exact same manner? Watch any of the forced in-game interviews with Phil Jackson, and you'll get some weird answers to questions that he doesn't really want to be asked.

Secondly, the fact that a flippant answer like this swirled out of control and created somewhat of a media frenzy is what Bynum has to be more careful about. I'm sure he could care less how Kobe or Mike Brown viewed his answer, but seeing as how the Lakers are the most covered and scrutinized team in the NBA, it would behoove him to keep his answers nice and neat. But as anyone who has actually lived in LA knows, the media stories involving the Lakers is a year-round thing in the city, so anything and everything that a player says will eventually turn into a story.

Last but certainly not least, the dude is 24 years old. I know, I know. That still makes him an adult, and as a nearly 8 year NBA veteran, he should know what he's getting into. But come on people! At 24, most of us were still fully entrenched in college-mode, only with a probably lame job filling our daytime hours instead of possibly going to classes. I can assure you that the majority of 24 year olds in the United States do entirely more immature things than Andrew Bynum, and probably a whole lot worse. Many 24 year olds would just be in their second year in the league, and would easily get a pass for anything that Bynum has ever done. Let's just be thankful that he isn't a 24 year old playing for the Detroit Lions.

And look no further than Bynum's own Laker teammate for a good history lesson on what it's like being a high profile 24 year old. When Kobe was 24, he had just won his third championship, but was thoroughly entrenched in a power struggle with Shaq that would eventually lead to the Lakers trading the Big Fella. Kobe was portrayed negatively at the time by the media, but has since won favor over the years.

So let's give Andrew Bynum a bit of a break. He's worked hard to get back from a couple of devastating injuries early in his career, and has molded himself into the second best center playing today. The guy went to a boxing trainer during the lockout, and has pushed himself to be both more physical and to have better moves around the basket, which has improved his scoring and effectiveness this year. Just like Kobe, here's hoping that his work ethic and commitment to winning will eventually break through all of the media's criticism.