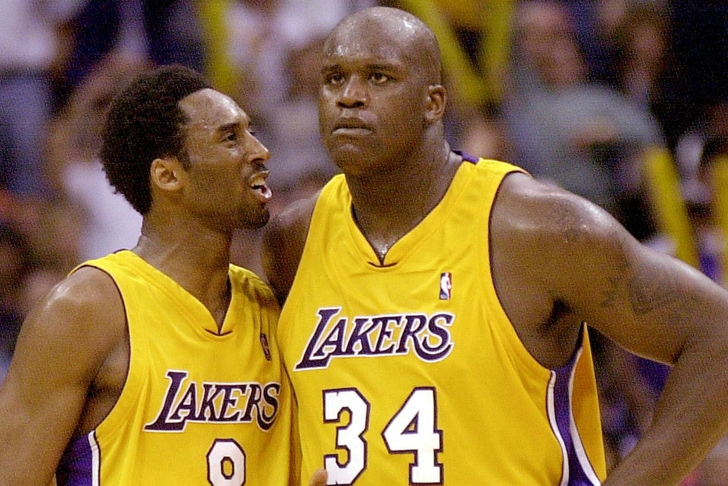 Bleacher Report's Ric Bucher dropped a bombshell of a story this week, putting together an oral history of the 2003-04 Los Angeles Lakers super team -- a squad that included the free-agent signings of Utah Jazz legend Karl Malone and on-court defensive mastermind Gary "The Glove" Payton, along with the tumultuous pairing of Kobe Bryant and Shaquille O'Neal

Loaded for bear and looking primed and ready to run roughshod over the entire NBA, the Lakers waltzed through the regular season and Western Conference Playoffs before running into a buzzsaw in the form of the Detroit Pistons in the NBA Finals. Detroit would win that series handily in five games, ending the Shaq/Kobe era with a distinct air of what if.

You can read the entire piece at this link, but we're here to break down the juiciest tidbits with our list of 6 Shocking Things We Learned From The Oral History Of The 2003-04 Los Angeles Lakers Super Team.

1. Shaquille O'Neal Threatened To Murder Kobe Bryant At One Point

Kobe Bryant and Shaq both publicly and privately clashed on numerous occasions during Shaq's eight-year stay with the Lakers, regardless of the duo's three shared championships.

Per Lakers VP of public relations John Black, it was a good thing for all parties involved that Shaq's 2003-04 season was his last with the Lakers:

Mostly it was Shaq and Kobe didn’t like each other, but it didn’t affect them on the court. They would say something about the other, on or off the record, but it didn’t become confrontational more than two or three times over the eight years. When Kobe gave the statement to Jim Gray where he went off calling Shaq fat and lazy, that was one of the times. There was one really bad one, early on. Brian Shaw had to pull them apart. Shaq threatened to murder Kobe.

Here's Shaq with his take on what could have been...

A misdiagnosis of Malone's knee injury cost him a ton more games than it should have, perhaps derailing the team's title hopes in the season's final stage against the Pistons.

3. Kobe, However, Didn't Want Shaq Back And Says As Much

There's been numerous conspiracy theories that Kobe Bryant had a hand in Shaq's departure to the Miami Heat via trade. While Shaq cites a business disagreement with Lakers management as the impetus for the deal, Kobe makes it perfectly clear in Bucher's article that there was no reconciliation afoot between himself and the big man:

Luke Walton's rookie season with the Los Angeles Lakers was a trying one for multiple reasons, but it also didn't help his case in the superstar-laden Lakers locker room that he's the son of former NBA great Bill Walton:

Training camp back then, the vets didn’t have to be there until four or five days later. So the first couple of days it was just us young guys and Phil. Then the vets showed up and we had a team dinner. It’s Shaq and Karl and Kobe and GP and they tell me as a group, because of my father, they had a bidding war on the flight over to decide whose rookie I was going to be—to pretty much make my life hell. Karl paid like $15,000 to make me his personal rookie for the year.

We would get to cities like Milwaukee—I remember Milwaukee specifically because it was snowing outside—and Karl was like, "I need a pair of these certain type of headphones." So I called all around and nobody had them and I was like, "Karl, all I could find were these $20 headphones in the store across the street." He’s like, "Well, if you think I’m a $20 player, if you think that’s all I’m worth, go get those." I was like, "No, seriously, Karl, if I get you these ones…" And he’s like, "No, do what you want, you make the call." So I had to take this 30-minute taxi ride to some suburb in the snow to get him these nice $100 pair of headphones and the next day we’re getting off the plane and I see them just sitting in his chair. He’s already off the plane. ... So he sent me to get more headphones.

5. Phil Jackson Pretty Much Knew The Lakers Would Get Steamrolled

When I was sitting down with the players, I said, "You just don’t understand this. You don’t have a chance in hell against Detroit. All the emotional momentum is for Detroit. The Comeback Team. The underdogs. They had the shot block at the end of the Indiana game—Prince blocked Reggie Miller’s shot and saved the ballgame. They won a seven-game series. So it’s gonna be a huge emotional thing."

And of course, Malone couldn’t play, and Horace Grant couldn’t play—both of my power forwards. Fox was on the team, but he hadn’t totally recovered from his injury. So we felt like we were going into the series on the downside.

...I saw it coming. Being a lame-duck coach, having a group of kids that were at each other’s throat for most of the year, having two guys like Gary and Karl, who were brought in as ringers. Karl was out. Gary was...it was a struggle for him to try and match up at that point for a long period of time in a game.

We were clearly overmatched in that Finals.

Karl Malone and Gary Payton were on the downslope of their careers when they came to L.A., but they were still marquee names who could've made big bucks playing for a less prestigious franchise with bigger roles to their names.

So, how exactly did the Lakers pull off signing both NBA legends. Shaq has a very simple answer for that...

A lot of people ask me, what was my part in attracting Gary Payton and Karl Malone to the Lakers, and my answer is simple: I did it.

I was on the phone with those guys once or twice a week. Gary was a little bit easier job, because he was ready to get out of Seattle. The Karl Malone thing was a little tougher, but eventually I got it done.