4 Teams That Could Trade For D'Angelo Russell 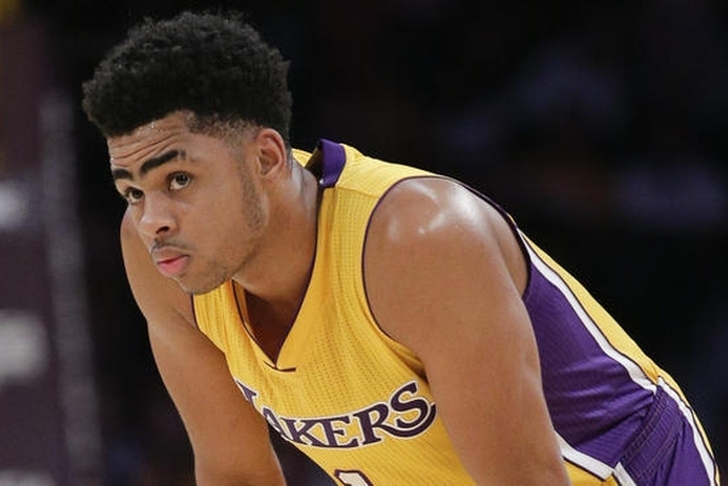 There is a giant rift between Los Angeles Lakers point guard D'Angelo Russell and his teammates stemming from him secretly filming Nick Young talking about being with other women even though he's engaged to rapper Iggy Azalea. That rift has lead to there being "no trust" between Russell, his teammates and the organization, leading to rumors that he could be on his way out of town sooner rather than later. If the Lakers do decide to trade Russell, here are the four teams most likely to trade for him:

4) Brooklyn Nets
Brooklyn has a huge, huge need at point guard, so they'd obviously do what they could to get Russell. The problem is the Nets have virtually no assets they could offer the Lakers. With less than a handful of draft picks over the next few years, Brooklyn would need to send star big man Brook Lopez to Los Angeles - which they don't want to do.

3) Chicago Bulls
Can I interest you in a potential D'Angelo Russell-Derrick Rose swap? The Bulls haven't been the happiest with Rose for the past few years, and with them poised to rebuild, Russell would be the perfect addition for them while not losing Rose in free agency next year. Los Angeles would get the big name they'd hope would attract other stars to LA.

2) New York Knicks
Russell and Porzingis would be another hugely entertaining pairing for New York's future, and the Knicks have been looking to add a long-term answer at the point guard position. The Knicks are another team that don't have a lot of assets to offer, but a mix of young and veteran pieces (Jerian Grant, Arron Afflalo, draft pick?) could be enough if the Lakers decide they simply can't keep Russell.

1) Philadelphia 76ers
The Sixers don't have the talented young players of the other teams on this list, but they'd be the most willing to give the Lakers an abundance of draft picks to make up for that. Plus, their desperation for a point guard will keep them at the negotiating table longer and potentially give up more than they would like. Russell would also have free rein to be the focal point of the offense on the perimeter.