3 Lakers Players Most Likely To Be Traded By The Deadline 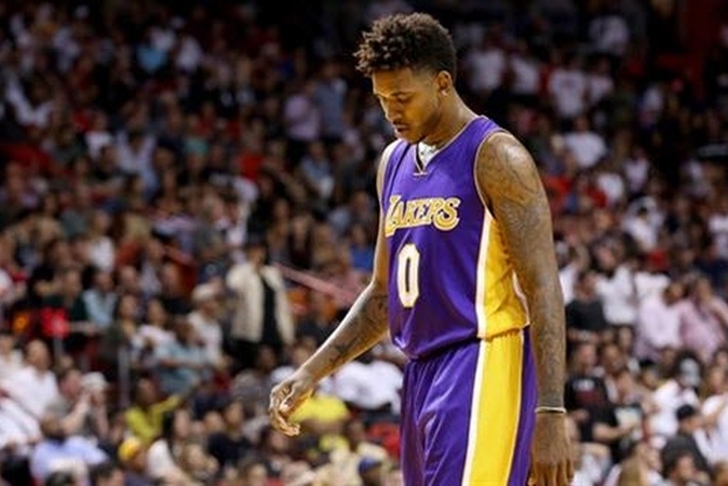 There have been plenty of rumors swirling around the Los Angeles Lakers and potential trades this season, and while they haven't pulled the trigger on a deal yet, there is some momentum surrounding a couple of moves as we head towards the deadline. Here are three players the Lakers have put on the block and are most likely to be dealt:

Nick Young
Young's role with the Lakers has severely diminshed this year, seeing near career lows in both minutes and points while playing behind Kobe Bryant on his farewell tour. Swaggy P still has some trade value - he averaged nearly 18 points per game in the 2013-14 season - and it seems as though he's run out of opportunities with the Lakers and Byron Scott.

Roy Hibbert
Hibbert is due to be an unrestricted free agent this offseason, and his expiring contract and defensive prowess give him value as a trade asset. His half-court style hasn't totally meshed with the Lakers' more up-tempo style this year, and it wouldn't be a surprise if LA tried to pick up a future asset (via young player or trade pick) in return for him instead of simply letting him walk this offseason. That said, his $15.5 million salary will be hard to move.

Ryan Kelly
Kelly has completely fallen out of favor with head coach Byron Scott as he has appeared in just 11 games for the Lakers this season while making several short stints to the D-League. Many teams could have use for the 6'11" stretch-four with a deft shooting touch, good passing ability, and high basketball IQ. Also a free agent after this season, expect the Lakers to try to get something in return for Kelly while they can.