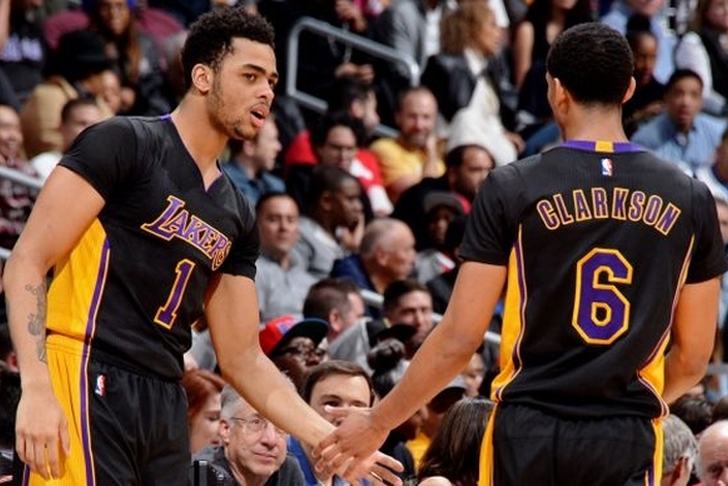 The Los Angeles Lakers are entering a crucial offseason for the franchise. It's Magic Johnson's first offseason in charge, and after four seasons without a playoff berth, the pressure in on the Lakers to start turning things around immediately.

Obviously, a big part of their turnaround will be keeping their first round pick. They are currently projected to have the No. 3 overall selection, but if they fall out of the top three in the lottery, they will lose the pick to the 76ers AND their 2019 first rounder to the Magic. However, that isn't something they have any control over, so nothing directly draft related is included in this list. Here are three crucial moves the Lakers need to make this offseason:

1) Find a way to unload Timofey Mozgov's contract
Los Angeles gave big money to both Mozgov and Luol Deng this offseason, and neither player is really part of the long-term future. Getting rid of both bad contracts is unlikely, and given Deng's leadership in the locker room, moving Mozgov appears to be the best resolution. It will also open up cap space for the Lakers to make a run at two top-tier free agents instead of just one which, in turn, makes it easier to sign one. The Sixers may be willing to take on his contract.

2) Create cap space or a trade proposal for Paul George
It's not exactly a secret that Paul George has a strong interest in joining the Lakers, and plans to decline his player option following next season to become a free agent. Indiana already flirted with the possibility of dealing George at the trade deadline, and will likely do so again this offseason. Los Angeles obviously has enough assets to put together a better trade package than pretty much everyone, especially if they get to keep that first round pick.

However, they shouldn't break the bank to go after George. If Indiana won't accept what the Lakers deem to be a reasonable offer, be patient for another season and wait until he becomes a free agent after next year. If talks with the Pacers don't go well, make the necessary moves to ensure they have enough cap space to offer him a max deal.

3) Trade D'Angelo Russell or Jordan Clarkson
At this point in their careers, neither Russell or Clarkson look like they will be anything more than a quality backup on a playoff-level team. The Lakers came to the realization that Russell may not be a point guard, and Clarkson has proven that he is more of a combo guard. As such, they're vying for the same role - and it doesn't make sense to really pay both of them.

Given Clarkson's contract and the fact that Russell is still on his rookie deal, Clarkson is probably the guy that ends up going. Either way, LA needs to make a decision on these two this offseason.