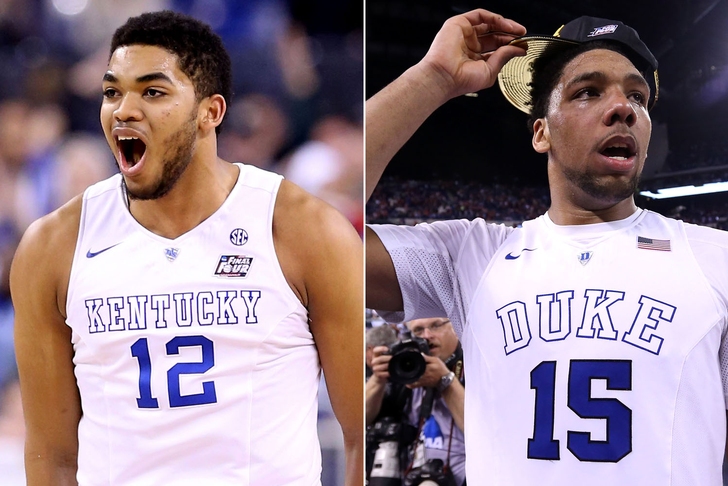 The Los Angeles Lakers hold the No. 2 pick in the NBA Draft, giving them a plethora of options. Many expect them to go with Kentucky center Karl-Anthony Towns or Duke center Jahlil Okafor, but there are a few other scenarios they’re considering in the days leading up to the draft:

The Lakers favor Towns, who is expected to be the top pick, but ESPN’s Chad Ford says the Timberwolves actually favor Okafor, leaving Towns for Los Angeles.

Virtually all the signals from sources inside the Wolves point to Jahlil Okafor being Flip Saunders’ favorite right now. That obviously can change as we get closer to the draft. Workouts and interviews and lobbying from staff (I hear most of the rest of the staff favors Towns) could push Towns back atop. And after watching Towns’ workout Monday, I believe that the Wolves will figure this out in favor of Towns. Towns has tremendous upside, no glaring weaknesses and he’s a better fit in Minnesota, in my opinion, than Okafor. He has the highest ceiling of any player in the draft and I think his impact will come sooner rather than later. And do not totally discount here either. I am told Saunders is also a big fan and might be willing to move Ricky Rubio for the right deal.

However, if the Lakers pass on a big man, they'll take a point guard - either Ohio State’s D’Angelo Russell and Emmanuel Mudiay.

According to Mark Medina of the Los Angeles Daily News, the team was one of a large group of teams who met with Winslow at the NBA Draft Combine.

Winslow would provide an instant impact on both ends for the Lakers, as he’s a skilled small-ball power forward adept at both shooting and locking down on opposing threats big and small.

His 12.6-point, 6.5-rebound average during the 2014-15 regular season was good enough, but he pushed his game to another level in Duke’s title run, averaging 14.3 points and 9.3 rebounds in the NCAA Tournament.