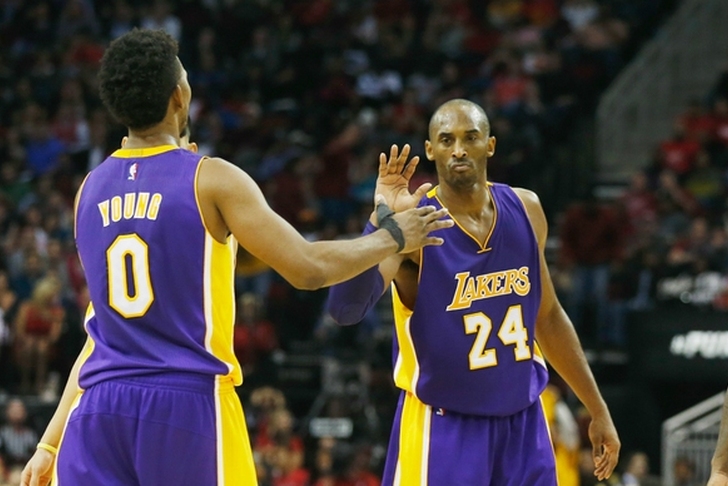 The Los Angeles Lakers are hoping to rebound from last season's disappointing 21-61 record, which was the second-worst mark in the Western Conference. What should we expect from the the Lakers this year? Here's our full Lakers season preview:

Is D'Angelo Russell the future?

In his lone year at Ohio State, Russell led the Buckeyes in points, rebounds, and assists last season, and that versatility makes him extremely dangerous whenever he has the ball in his hands. He’s excellent at attacking the basket, but also has the range (41.1 percent from beyond the arc) to hurt a defense from anywhere. Russell does need to improve his defense a little bit, but his 1.6 steals per game show that he can still make an impact on that end of the floor.

If he can produce on an all-around basis like he did at Ohio State, he'll become a star - and the Lakers are counting on that.

The return of Kobe Bryant

The Lakers will obviously be better this season with the return of their best player, but Bryant will also give Los Angeles and the experience and leadership they so desperately lacked this year. The Lakers' roster is filled with younger guys that will need someone to hold them accountable, and Kobe is that guy. Los Angeles may not have made the playoffs even if Bryant was healthy last season, but the Lakers would've gotten more out of the roster with him on the court.

What can a healthy Julius Randle provide?

Kristaps Porzingis Pacing Himself on Road to Stardom

Five things to watch for the New York Knicks

Carmelo has staying power with Knicks, unlike Phil

There is a lot of optimism surrounding the Lakers, but I just don't see where that will be validated. Kobe Bryant probably won't suffer a season-ending injury, but it'll be a surprise if he plays more than 50-60 games this season. Head coach Byron Scott has never overachieved, but instead has always underachieved as a head coach, and I think D'Angelo Russell's limited athletism will cause him to be rather unproductive this season.