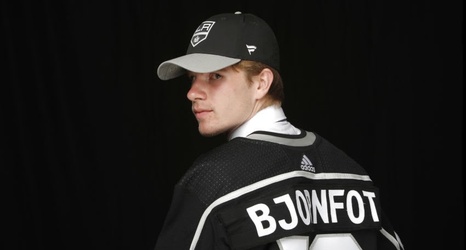 After playing in only three games last year with the LA Kings, Tobias Bjornfot is ready to transition into a full-time role this season.

When the LA Kings took Tobias Bjornfot with the 22nd overall pick in the 2019 NHL Draft, he surprised many when he made the team out of training camp leading into the 2019-2020 campaign. Paired with Drew Doughty for only three games, Bjornfot had some evident growing pains, especially in the opener against the Edmonton Oilers.

The 18-year-old defenseman struggled to contain the speedy Connor McDavid and Leon Draisaitl, a problem for most teams last season.