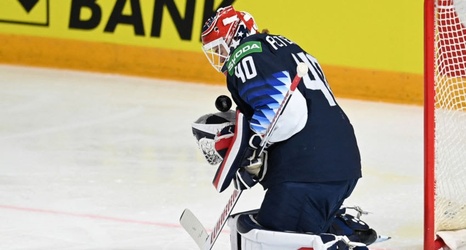 US' goalkeeper Calvin Petersen saves the puck during the IIHF Men's Ice Hockey World Championships semi-final match between the USA and Canada at the Arena Riga in Riga, Latvia, on June 5, 2021. (Photo by Gints IVUSKANS / AFP) (Photo by GINTS IVUSKANS/AFP via Getty Images)

Capping off his solid tournament with a bronze-medal victory, Cal Petersen of the LA Kings was named the Best Goaltender at the 2021 World Championship.

Enough cannot be said about LA Kings‘ netminder Cal Petersen and what a stellar World Championship he had in Latvia. In addition to capping his tournament off with a bronze-medal victory, Petersen was given the honor of being named the Best Goaltender at the 2021 Worlds.