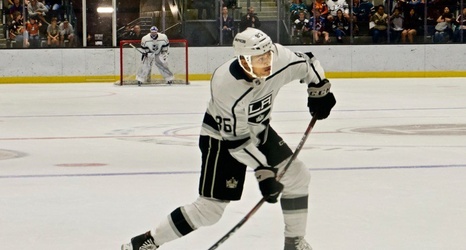 EL SEGUNDO, CA — One year ago, Los Angeles Kings center prospect Akil Thomas was trying really hard not to screw up during the Kings rookie and training camps. But that strategy backfired—it prevented him from making a solid impression.

“Last year in training camp, all I was really focusing on was trying not to mess up,” said the 19-year-old, 6-2, 185-pound native of Brandon, Florida, who was selected by the Kings in the second round (51st overall) of the 2018 National Hockey League Draft. “As a young guy, playing with a guy like [superstar center] Anze Kopitar, I didn’t want to be the guy who turned the puck over, they score and we lose the game by one.