We have an official Mookie Betts Los Angeles Dodgers bobblehead 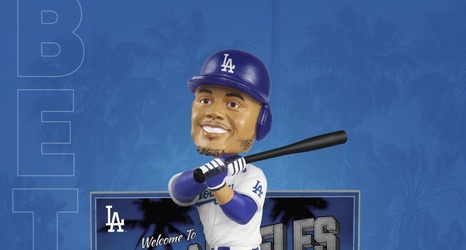 Mookie Betts is coming to Hollywood! Welcome the Los Angeles Dodgers’ newest superstar to town by adding this officially licensed Mookie Billboard Bobblehead to your collection.

After all, it’s not everyday that your team gets to add an MVP to the lineup. Last season the former Boston outfielder hit .295 with 29 home runs and 80 RBI. That’s nothing to shake a stick at, but it pales in comparison to his 2018 campaign.

As Dodgers fans (painfully) know, he led the Sox to a World Series title after hitting .346 with 32 homers in the regular season.