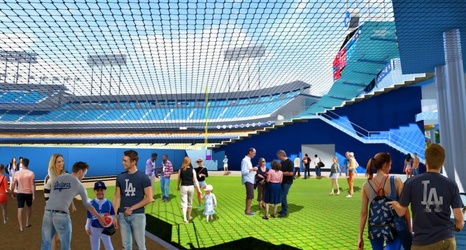 The Los Angeles Dodgers celebrated their last day of the offseason by formally introducing Mookie Betts and David Price during a press conference that was staged in center field at Dodger Stadium.

The players, along with Dodgers president of baseball operations Andrew Friedman and manager Dave Roberts, sat with their backs to home plate and facing a Dodger Stadium pavilion that remains under heavy construction.

At the time of unveiling the logo for the 2020 MLB All-Star Game, the Dodgers additionally announced a $100-million renovation of Dodger Stadium. The project is adding a plaza in center field, two new sports bars, new children’s play area, five elevators, four escalators, and “home run seats,” among other amenities and upgrades.