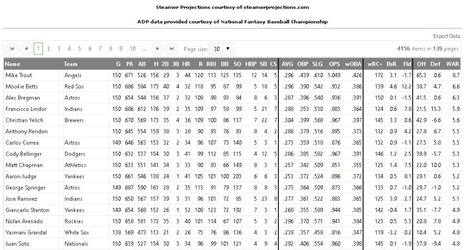 Not only are projection systems useful tools for the fantasy player, but they are also commonly used by baseball executives when trying to evaluate players across the majors with little information at hand. Some front offices have their own separate rating systems which use complex formulas and logarithms. Andrew Friedman of the Dodgers is believed to have one of the most extensive.

While I don’t view these systems as religions when it comes to predictions, I like to look at them to get an idea for what could happen the following season. The three biggest players in the projection game are Steamer, PECOTA and ZIPS, with Steamer being the most remarkably accurate of the three.