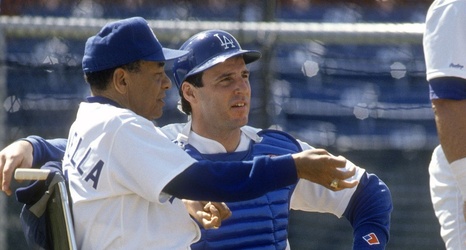 Mike Scioscia. Many images come to mind, and moments also. Like when he took Dwight Gooden deep late in game 4 to tie the Mets. Gibby would eventually win the contest with a homer of his own in the 8th. The other would be the number of bone-jarring collisions at home plate he was involved with. To this day, I still think he was the best they had at blocking the plate.

Michael Lorri Scioscia was born in Upper Darby, Pennsylvania, on November 27, 1958. He played baseball, football, and basketball in high school. He was named Delaware County’s baseball player of the year in 1975 and 1976.