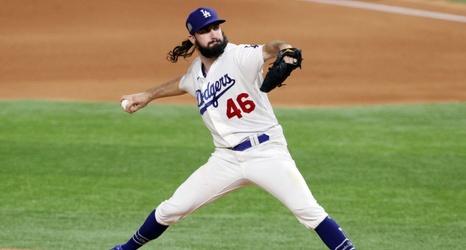 ARLINGTON, TEXAS - OCTOBER 21: Tony Gonsolin #46 of the Los Angeles Dodgers delivers the pitch against the Tampa Bay Rays during the second inning in Game Two of the 2020 MLB World Series at Globe Life Field on October 21, 2020 in Arlington, Texas. (Photo by Sean M. Haffey/Getty Images)

Plenty of Dodgers fans are waving the white flag of surrender ahead of Game 6, spooked in large part by the Game 2 fiasco that resulted from the unfinished bridge between Clayton Kershaw and Walker Buehler.