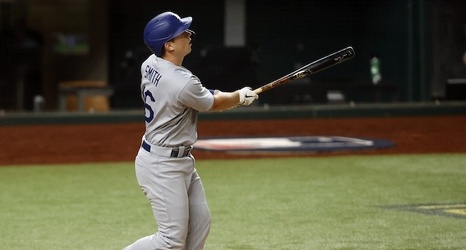 The Los Angeles Dodgers winning the 2020 World Series has been celebrated by FOCO with a series of limited-edition bobbleheads, and on Tuesday they released versions of Joe Kelly, Tommy Lasorda and Will Smith.

The Kelly bobblehead is a three-foot version and numbered out of 20. FOCO has previously released such oversized bobbleheads for Julio Urias and a Dodger Dog.

Kelly fittingly is depicted doing his pouty face expression that went viral immediately after he flashed it at Houston Astros shortstop Carlos Correa early into the 2020 season. It led to both benches clearing and Kelly wound up receiving an eight-game suspension that he appealed and ultimately got it reduced to five.