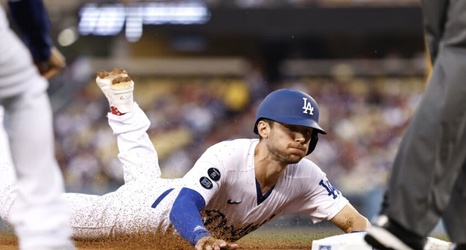 LOS ANGELES, CALIFORNIA - AUGUST 17: Trea Turner #6 of the Los Angeles Dodgers slides into third base against the Pittsburgh Pirates during the first inning at Dodger Stadium on August 17, 2021 in Los Angeles, California. (Photo by Michael Owens/Getty Images)

It’s still a bit hard to believe how much better the Los Angeles Dodgers got at the trade deadline despite dealing with what many other teams would consider debilitating injuries, off-field situations, and regressions.

We don’t need to get into it all, but Clayton Kershaw has made one start since July 3, Cody Bellinger is statistically one of the worst players in all of baseball, Dustin May was lost for the season four months ago, we’re never seeing Trevor Bauer again, and AJ Pollock hit the IL right when he was the team’s hottest hitter.