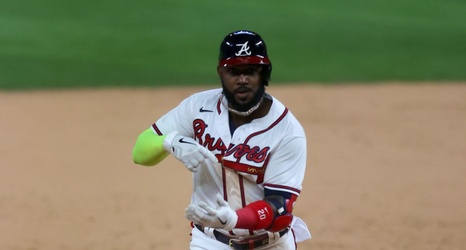 ARLINGTON, TEXAS - OCTOBER 15: Marcell Ozuna #20 of the Atlanta Braves celebrates after hitting a solo home run against the Los Angeles Dodgers during the seventh inning in Game Four of the National League Championship Series at Globe Life Field on October 15, 2020 in Arlington, Texas. (Photo by Ronald Martinez/Getty Images)

The Dodgers remaining interested in Marcell Ozuna raises a number of questions.

The Los Angeles Dodgers‘ offseason picked up once again this week when it was reported they were monitoring Trevor Bauer’s market and would be willing to strike if the price was right.