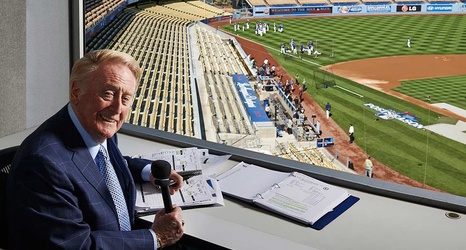 Dodgers and MLB broadcasting legend Vin Scully has called many, many, famous baseball moments. The little nubber that dribbled through Bill Buckner’s legs in the 1986 World Series. Kirk Gibson’s improbable homer in the 1988 World Series. Koufax’s perfect game in 1965. Don Larsen’s perfecto in the 1956 World Series.

But his finest performance may be his call of Hall of Famer Hank Aaron’s 715th homerun. Aaron blasted number 715 off of the Dodgers Al Downing, and passed Babe Ruth for the all-time record for most career home runs.